Vice Prime Minister noted that the new government of Italy will defend its position on fundamental issues, as is already happening in the field of migration. The Minister stressed that “Italy could not take half of Africa and led migrants to museums”. 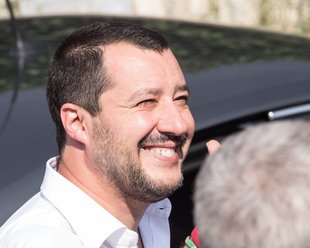 Salvini said that Italy and the EU needs to mend relations with Russia and to “talk to each other, to trade, to cooperate in the field of economy and fight against terrorism”:

– Some said that you won’t last long in government. But you still the head of the interior Ministry of Italy.

– 20 dense-intensive work and facts days. We returned to the Italians the dignity and pride of their country, began to say “no” when you need to claim on “Yes” and immediate answers when it comes to security, unemployment and migrants. These 20 days compensated for the lost 4 years of silence and inaction.

– Indeed, it seems that you over 20 days did more than any government in 5 years. No “humanitarian ships” on the issue Tsyganov announced the census is on the agenda the issue of tax cuts.

– Yes, unfortunately, our Ministers have found in drawers of desks or debris, or long-expired contracts. Huge gaps in the law on justifiable self-defense, school reform, thousands of teachers could lose their places in the fire Department – the shortage of 5 thousand people. We can’t work miracles and can’t do in a month what takes 10 years. But the priorities we set. Previously, Paris and Berlin, it was taken for granted that Italy always says, “Yes, sir! This minute, sir!” And now they realize that everything has changed.

We just returned from the city of Ragusa, went to Syracuse to see the Greek theatre together with a group of migrants. So they get acquainted with the history of the country in which the asylum seekers. Then in Camisa, where he observed how migrants play in the tournament against the team of the city. Is not there a contradiction between the official policy of Rome and what is happening on the ground?

– The problem in numbers. We for 4 years caught in the sea of 650 boats, has received 430 thousand requests for asylum, of which 130 thousand remain pending. All this lasts a long time and costs money, and we don’t have time to protect genuine refugees – those who are entitled to asylum under the law. Need to limit to reduce the number of those who sail from Libya, to reduce the number of deaths at sea and reduce the time for consideration of the applications of those who have the right to stay. We can’t make in Italy, half of Africa, then to drive them to the theatres or to the mountains to ski. I repeat: those who have trouble at home – my friend and brother. One who has no need to go home.

– Because you never said it would close ports for everyone – only for those humanitarian ships that secretly cooperate with the traffickers?

– Continue: because the same day I went to Italy military ship “Datillo”. 900 people on Board. They were allowed!

– That’s it! It is necessary, as is already the case, to conduct the selection in Africa. Women and children fleeing war in Italy can always find their home and refuge. The problem is that most of those who come and stay here a year, two, three at our expense, doesn’t run. I want to make a clear distinction between migrants and non-migrants.

– What Italy can do, to stop sending boats with migrants? To build a home in Libya or in Libya or to pay the traffickers?

– To force Europe to remember that she is one. Europe has paid 3 billion euros to tackle the problem of migrants, then another 3 billion euros in Turkey. You need to invest and control the southern borders of Europe and thus to invest in the economy of North Africa.

– What happens if in Brussels will not solve anything?

One of the main things that you will never change their views, turn in the direction of Russia – as you see it?

– Came to power a government that wants to do what he had promised during the election campaign. Sanctions against Russia are useless and harmful. Point. We are ready to move from words to deeds, but we in Europe, almost the only ones: alone against the whole world. Every time we start talking about Russia, we are accused that we are funded by Putin that we are working on Russian hackers, the Russian bankers. I believe that Russia, Italy and the EU need each other with each other to talk, to trade, to cooperate in the field of economy, the fight against terrorism.

– What Italy can do? We’re all realists: to lift the sanctions need 2/3 of the votes or veto.

– The example of migrants, we have already shown that when it comes to critical things we are able to say “no”.

– But in Brussels are preparing to extend sanctions?

– One package they have in haste extended, not waiting until the Italian government will form its position. This semester the President, in the European Union – Austria, our friend. View. Again, the numbers say that sanctions against Russia are not working.

– Are you willing to veto?

– I will not take away jobs from our Prime Minister, but we stand in solidarity and hope, be convincing! See!

– You went to the Russian market literally in one day. How much is needed to re-win?

– And here is the problem. Because Russia had taken preventive measures and had replaced the Italian suppliers on their own, invested in its agriculture. I believe that the brand “Made in Italy” you have not forgotten, and we will try to compensate for the lost years. It will not be easy, but we will make every effort.

– Your allies in Europe, who are they?

Is Austria, with the authorities which we met recently, several countries. Of course, in Europe is used to, that everything is decided in Paris, Berlin and Brussels, but we’ll see.

– The last question. You have summer vacation will be. You took such a rate.

I am in charge of the Ministry, which is responsible for the security of the country, and that means no weekends and holidays. I hope to spend with your kids a few hours at least on weekends, is sacred. But I made my choice. I hope that rush is not and will not emergencies.

– Thank you very much for the interview and see you!

previously, the portal “News.Economy,” Matteo Salvini and the deputies of the party “Northern League” was originally opposed sanctions against Russia. The acting interior Minister of Italy was one of the first European politicians who visited the Crimea after joining Russia according to the results of the last referendum, expressing respect to the choice of the residents of Sevastopol and the Crimea Peninsula.

The economic crisis in Iran has been weakened Rouhani

Him and Putin discussed Syria