Independent refineries China – the so-called “kettles” – received high profits with 2015 or as long as they were allowed to directly import crude oil.

But the good times for the “dummies” seems to have ended, as the new tax rules drastically reduce their margins and they will have to reduce the volume of purchased oil, which will inevitably affect the growth of demand in the world’s largest importer of hydrocarbons.

Import quotas for “dummies” and the fact that they could buy crude oil directly from the countries-exporters of “black gold” three years ago, made them important players on the world oil market. Procurement of independent refiners has grown steadily and has reached approximately the fifth part of the total Chinese imports.

In the period between 2015 and early 2018 independent processing plants flourished – allocated annual and semi-annual import quotas of crude oil, and prices then, as we recall, were relatively low. 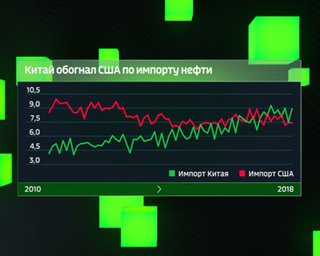 Oil imports from China and USA since 2010

“Kettles” also used a variety of loopholes in the tax regime of China to pay a reduced rate, to hide a part of information or even to evade taxes.

However, from 1 March in China began to operate the new tax rules and reporting mechanisms to combat tax evasion by independent refiners. The new rules benefit large state oil companies of China, but they reduce the profits of independent players.

Introduced a system of tax reporting has tightened control over all operations and made tax collection more efficient by eliminating from the chain of regional governments. Independent refiners have recently enjoyed the protection of local authorities, who in turn received economic benefits from the “dummies”.

Although all tax revenues went to the center, the province has provided a “dummies” tax incentives for employment and steady income.

“It’s hard to give a precise figure of the rapidly growing costs, but one thing is clear, the most difficult times still ahead”, – says the new tax requirements based in Beijing analyst.

Independent refiners will have to cut costs to remain profitable, and some may even be closed, predicts the head of one of these plants.

“We will see radical changes in the industry and we are not talking about merging one plant to another. We will see a series of bankruptcies,” – said at an industry event Chinese “dummies” in Shandong province, the General Director of Haike Petrochemical Xu yuan.

According to him, the independent factories will try to switch to other raw materials and more use of hedging is to reduce costs. However, many of the small processors do not have enough experience and skilled professionals to work with complex hedging strategies.

It is reported that the “dummies” instead of crude oil have already started to buy oil, since it is cheaper and it is possible later to obtain a tax deduction.

Before small refiners are allowed to export crude oil, they are the raw material used straight-run fuel oil (SRFO) is a mixture of heavy oil residues direct distillation of crude oil with low-viscosity fractions. Now they once again switch to SRFO due to higher crude oil prices and new tax rules.

Many analysts are already predicting that the tax will lead to the fact that the independent refineries will dramatically reduce the purchase of crude oil and thereby slow the growth of demand of oil in China.

Whether Merkel and Orban agree on the refugees?

Iran – an obstacle to relations between Moscow and Riyadh