The desire of the administration of Donald trump to economically strangle Iran after the release of the nuclear deal has already yielded first results: European investors EN masse refuse to deal with Tehran.

However, the Iranian leadership believes that he has in reserve a secret weapon: Chinese investment and oil exports to China, which should offset losses from the West.

Given the high energy needs of China and the “trade war” between Washington and Beijing, it may seem like a realistic scenario. However, according to many observers, all this is nothing more than a fantasy. China is really able to soften the sanctions pressure on Iran, but he can’t and wants to become the economic Savior of Tehran.

To the Iranian government, the situation becomes critical: the national currency is rapidly depreciating, dropping on the unofficial market up to 90 thousand riyals to the dollar, which less than half of its value than early in the year. This past weekend in Tehran were the most massive since the 2012 street protests. Moreover, US sanctions will be introduced only in August, indicates Bloomberg. 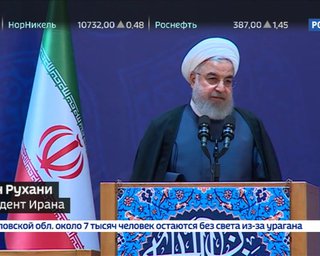 The US wanted to isolate Iran, but in the end found themselves in isolation. This opinion was expressed by the President of the Islamic Republic of Hassan Rouhani. He noted that all of the major economies, including Russia and China, condemned the decision of Donald trump on withdrawal from the agreement

Compounding the situation is OPEC, which last week decided to increase oil production, which will further strengthen economic pressure on Iran. The country is unable to increase production as because of the upcoming American restrictions, and because of its decrepit infrastructure. Now, when the price of oil would almost certainly fall, Iran will get a much less much-needed hard currency.

But if there is enough plan B (Chinese script) that Iran was able to overcome a severe economic crisis?

In Washington there is much discussion on this issue. New US sanctions will not affect the Chinese private sector as much as European, but only Chinese investment and exports are not very much help the Iranians.

Recall that after the United States withdrew from the nuclear deal this spring, Iran turned to Europe. In order to maintain the agreement in force, the European Union urged companies not to panic, continue to trade with Iran and invest in its economy. European governments offered to provide business warranties and to ask the Americans have an exception for companies doing business with Tehran.

But European companies seem to not listen to Brussels. On the investment front, PSA Group (maker of Peugeot and Citroen) became the latest company that refused to have a planned joint ventures with two Iranian car manufacturers.

As for the oil, France’s Total has also said it will abandon a multibillion-dollar deals with Tehran if it does not receive from the United States specifically exempted from the sanctions, which is unlikely. About a dozen other European firms also cancelled or suspended the trade and investment agreement with the Islamic Republic.

It is true that Iran and China for some time have a pretty close relationship. After the signing of the nuclear deal in 2015, Chinese President XI Jinping announced a 25-year plan for the expansion of economic relations between the two countries, which includes the increase bilateral trade tenfold or up to $600 billion in China, for example, could take the Total deal.

But many experts believe that Chinese investments will not be able to compensate for the fact that Iran would lose due to the rupture of relations with the West. So, in order to restore its oil infrastructure and to reduce production costs, Iran needs to import only available in Europe and the United States advanced technology.

In addition, observers doubt that the expected Chinese investment ever materialsource. More major Chinese companies and banks interested in doing business in the United States or transactions in dollars, will be to avoid relations with Iran (in the same way as European firms). The so-called extraterritoriality of us sanctions apply to all companies, including Chinese and carrying out transactions in dollars, even if these transactions are with non-us firms, or “daughters”.

With serious challenges facing Iran and the oil market. Currently, the Islamic Republic exports about 2.62 million barrels a day. According to the Iranian economic publication of the Financial Tribune, about 38% of these sales come from European countries. Even if Europe refuses to impose severe sanctions, almost certainly the imports will be reduced.

Iran may be able to compensate part of the losses due to the sale to China of additional barrels (prior to the signing of the nuclear deal, he was shipped to Asia slightly less than 1 million barrels per day). But in any negotiations with the Chinese lack of viable alternatives to Tehran puts him in a very disadvantageous position.

The reduction of oil exports will reduce the foreign exchange reserves of Iran and hamper the fulfillment of payment obligations.

Added to domestic pressure from the conservative forces of the country, primarily the influential Islamic revolutionary guard Corps. Hardliners of Iran require the President Rouhani to break off all relations with the West and to resume the nuclear program of the country.

In this extremely difficult situation Iran is in urgent need of foreign investment and secure markets for its oil exports. If Tehran hopes that he will receive from China, it likely will be deeply disappointed.