The American edition BuzzFeed, citing two unnamed diplomatic source reported that the President of the United States Donald trump at the summit “the Big seven” in Canada, asked their colleagues in G7, why they supported Ukraine in its confrontation with Russia. He also allegedly said that Crimea is Russian, because the local population speaks Russian. The publication noted that it is not sure whether all this is said seriously. Other evidence that the us leader said such a summit was not followed. Considering that trump was talking about the Crimea during the presidential campaign, the veracity of the information cannot be ruled out. 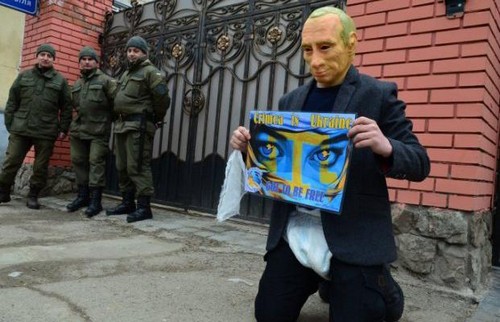 In a new interview with TV channel FохNews the U.S. President explained his desire to see Russia in the G8, so he can better convey to Vladimir Putin Washington’s position. In particular, to explain to the Russian leader that Russia should get out of Syria and Ukraine. In addition, trump told the journalist that his predecessor Barack Obama was to prevent the annexation of Crimea, because Putin is a manifestation of disrespect for the US leadership. Russian opposition Konstantin Borovoy explained why not trump needs to solve the Ukrainian problem.

Trump does not solve the problem of the liberation of Ukraine refers to a radical solution. Because it is clear that politically Americans support all the efforts of Europeans in this sense. Trump does not solve the problem of Ukraine: preservation of democracy in Ukraine and its independence, the fight against corruption is not the trump and the citizens of Ukraine and the Ukrainian authorities.

Trump is not only trying to solve them. Moreover, he is considering options to appease this situation in different ways. Probably, for most citizens of Ukraine the issue of Crimea is the most painful, because it is a question of independence. For me it is too painful, because it means the continuation of Imperial policy of the Kremlin. As for trump’s negotiating position. It solves other problems.

The first is the problem of nuclear disarmament, the preservation of peace on earth. The preservation of the United States, because trump is not the President of the world, and the United States. It solves the problem of maintaining agreements with Russia concerning, for example, missiles and medium-range – there are several treaties, the validity of which is about to end or that is not very respected.

The issue of the independence and territorial integrity of Ukraine is a problem the citizens of Ukraine. Assume that trump, Tusk, Merkel and the Makron will solve Ukraine’s problems, instead it is some pretty idiotic misconception. This would be possible if Ukraine was a full-fledged member of the Western community.

Every time, when some external forces are trying to help Ukraine, the Ukrainian government says, “No, don’t! Money want us to give? Please better cash in my suitcase and straight to the presidential Administration. And so it is not necessary”. I say this not unfounded – this is my experience with the Administration of the President of Petro Poroshenko. I offered to organize a campaign of support of Ukraine from the leading cultural figures (I started with singers in Los Angeles). “Why? asked in the administration. – What we personally get for it?” I said that any money not necessary, moreover, we will collect money for Ukraine, for the ATO. Even did not lift a finger. What is the point to lift a finger, if personal income from this operation will be neither one of those goons who sit in the presidential Administration? They are satisfied with the status quo.

During the war to usurp some means much easier than in a normal situation, with normal tax office. I was just in Odessa. A huge port that could replenish the budget of Ukraine, probably by about 25%, almost does not pay any taxes. This situation is very convenient for bandits, sbushnikov and “looking” from the government.

Talking about trump, the Ukrainians need to keep in mind that it has nothing to do with it. Not trump creates problems in Ukraine, he solves them.

Trump is wrong, believing that appeasing the aggressor can lead to some degree of stability, but he considers such an option. No matter, said trump is about Crimea at a meeting of “seven” or not. It is absolutely clear that the problem with this way of appeasement of Putin and the cessation of hostilities in the Ukraine possible. Moreover, there is no indication that the Crimea needs Ukraine.

Best for Russia to meet trump and Kim Jong UN?