1. The next meeting of the councils today, the so-called “Prosecutor” asked for Vladimir Baloga 4 years in a penal colony on charges of “disruption of work razdolnenskiy detention center”. In view of the first fabricated criminal case under 6 years of General regime colony and a fine in the amount of 10 thousand rubles. Baloch looks very exhausted. Let me remind you, resident judge of the Ukrainian flag!

2. Crimean Tatar, civil journalist Nariman Mamadaminov, whose occupants are charged with “incitement to commit a terrorist act”, for 20 days was admitted to the psychiatric hospital. Mamadaminov wrote a letter from jail with words of deepest gratitude and appreciation to all who remained on the sidelines.

3. “Yes, this non-violent struggle, of which we talk a lot, in reality, cost price of freedom, and unfortunately, sometimes even of life.” Well-known Crimean human rights activist, coordinator of “Crimean solidarity,” and more recently became a political prisoner Server Mustafaev, wrote an appeal to Ukrainian and international human rights activists, politicians and activists.

4. From Russia to the Crimea go to the doctors-swindlers, the chief physician of the “GBUZ Republican clinical hospital” Anatoly Oleynik: “professionals from the mainland are very subjective. From 2015 through my hospital visitors passed 11 people, 10 I fired. Unfortunately, if the doctor is a good specialist and he works in the city, I can’t go to another region. Come, to put it mildly, fun.” However, he noted that the medical facility has a shortage of specialists (screen).

5. “Yesterday across Russia held demonstrations against raising the retirement age. Crimea and Sevastopol rallied. Today in Sevastopol announced the holding of the five-thousandth meeting on 20 July and judging by the declared number of participants, in Sevastopol it is planned one of the largest stocks,” report of the Sevastopol propagator*dons. Even in Russia, the maximum of such meetings came to 4.5 thousand people.

6. In Sevastopol yesterday burned down apartment. According to witnesses, 90% of the fault lies with the firefighters who acted extremely unprofessionally. Of course, it’s not the shopping centers close and bribes from the businessmen to take. There’s also be able, and risk need. And why would they?

7. Country gas station continues to amuse the residents of Dzhankoy: “Someone tell me why all gas stations have no gas? What, the gas ran out???”. Answers: “Where Russia’s gas?! You head thinking?”, “Due to the world Cup was forbidden to carry dangerous goods of Russia” “Then bring twice as expensive”, “How many people have once again thrown the loot for the installation of Gazoapparat”, “Yes, the price can’t be determined, that are not made” (screen).

8. Quilted jackets Yalta, in which before the occupation each year, all berths was tidied after autumn and winter storms, again shocked by nanotechnologies: “As my friend said: “Pier a-million”, or how to spend the budget on “redecorating the bottom of the embankment”. I know that many people are tired of posts about a kind of “nagging”, but if this is not done, then no reaction will be. For 4 years in Russia on the bottom of the embankment was done only one thing: the demolished “Food” and all. And emergency berths just painted over rust with white paint. Few people know that over 2 years have replaced at least 2 of the port Director, and one who now is a friend/brother/matchmaker/friend S. Aksenov. A request anonymously, and there is little there, the FSB is watching us. And unnecessary knowledge and even go to jail”. Cotton moderator posted anonymously. Comments like, “Generally, of course, a disgrace. Is our government to such an extent immortal? Yalta should be given the title of hero-city. Our heroic dead are authorities on the protection of their financial interests – not an inch of money the enemy will not yield”, “(the Author) Well, okay, not anonymous – not so anonymous”, “As the saying goes: “one hand washes the other”. Just so nobody is afraid of anyone”, “From year to year nothing changes. S – Stability, Author for nothing “frightened”. Fesy (FSB) and anonymous if necessary!! Naive!!!!! Smile”, “Guys, Russia – the bottom of the well. Got it. Suffer, like everyone”, “*b your! The heart bleeds”, “look at this beauty. Probably dough vbuhali”, “Also recently from this laughing. Well, PI*Dec some!!! Do nothing at all. The city centre is just a shame!!!!”, “Yeah, yeah, everywhere zvizdets” (photos screen).

9. Come in large numbers again wondering where in the Crimea the ATMs and offices of Sberbank (the screen).

10. Occupiers are once again going to celebrate the Day of baptism of KIEVAN Rus. Only the word “KIEV” they recently do not mention rewriting the story for the needs of the bloody Kremlin. Everything stolen from them, absolutely everything: “In the period from 23 to 28 July in the Crimean museums, libraries, and children’s camps will be held exhibitions, concerts, tours and lessons of mercy. Crimeans and guests of the Peninsula will talk about iconography and the history of Orthodoxy in Russia. July 28, in Simferopol will take place the youth festival-a concert “Russia Millennium”. Details of the event are specified” (photo-screen and comments).

11. Motorela in Gurzuf in shock from gaweni: “the Horror! From Gurzuf make capital fringe, Shalmanov and barbecues!!! Save Gurzuf!!!”. The vatnitsa indignantly replied the inhabitant of the village: “You’re at the bottom? See, the hatch is open? There Koktebel. Climb”. But after half an hour wateryou from Gurzuf was good and great to live in shit. Her greatness dripped the victory of Mordor over Spain. And Motorala erupted in ecstasy (screens).

12. Lightning! In connection with the victory over Spain, the Russian government decided to cancel the pension. Exactly. For nefig!

13. Vata is happy, goes. Under the guise of Bibiana them something banned or will increase. And it’s not about the salary. Babykate on, the traitors over!

14. Spade, Yes, you went to x*y with his nogomyach! Force has no no. Of each iron, the stench. A neighbor yelled as the patient: “VPERD.” Die with this football! I you this smelly football from each kettle still remember, scum!

15. The growth of tariffs for gas in the Crimea will last five years, said the occupants Uraaa! 5:0

16. Yesterday I went to Yalta the bus, when one Zalesskaya old hen began to yell to the whole cabin “has masipumelele, rasiya vperd!” and clapping. But I had to see the faces of the local – they expressed full naplevatelstvo and bewilderment.

17. Ukrainian swimmer Andrey Govorov from Crimea in competitions Sette Colli Trophy in Rome set a new world record in the 50m butterfly. In the final competition of Dialects showed a time of 22.27 seconds. 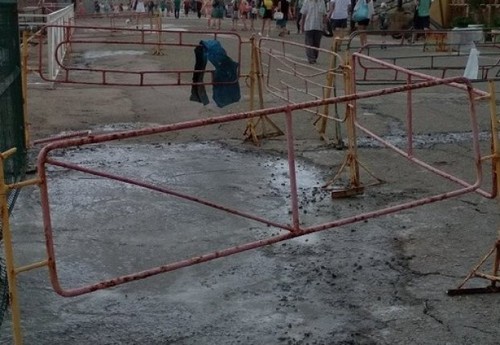 PS will Finish the release of the memories of residents of Sevastopol “Remember the championship of Europe on football in 2012 in Ukraine? Something I don’t remember the stories about Ukrainian women, EN masse pursuing foreigners in unrestrained desire to surrender to foreign football fans. Maybe it’s because they are about buckles, spirituality and special way nobody told you?”.

The political fragmentation of the Persian Gulf