This week President Donald trump will hold a meeting with key U.S. allies at the G7 summit in Quebec.

The EU and Canada threatened retaliatory measures if he does not change course in relation to new duties on steel and aluminum. China, being open to negotiations to resolve the dispute, warned that defaults on trade, if the President realizes the threat of the introduction of tariffs for Asian countries. China does not want escalation of tension in trade relations, but it will protect their interests.

Trump changes his mind often. Allies and rivals of the US seems to hope that he will do it in respect of rates in the next few days. If he does not, the trade war may be inevitable. The white house seems to remain calm against the threats from the allies. Chief economic Advisor, Larry Kudlow stated that the blame for any escalation lies with the trading partners of the United States.

On Monday, trump made the situation worse by posting a tweet saying that China and Canada suffer from unacceptable barriers against agricultural imports.

“The administration’s position in negotiations is often unpredictable, so there is a risk of over-interpretation of a single event. However, this is another signal that the prospects for short-term transactions under NAFTA disappear within a few weeks after it seemed that agreement could be achieved, especially the automotive sector”, – noted the experts of Goldman Sachs.

Investors in Asia seem to be a little frightened by the talk of a “trade war” and the stock markets of Japan, China, Australia and South Korea continued on Monday.

Financial leaders from developed countries after three days of talks on Saturday remained “unanimous” in its condemnation of the decision of trump on the introduction of tariffs on steel and aluminum, promising to speak with the responses, if trump won’t change his decision.

It was a rebuke, which foretells a big drama, when trump will meet with leaders of six other industrialized countries on Friday at a summit in Quebec.

At the same time, Beijing faces resentment from the revival of trump’s threats to impose tariffs on Chinese imports in the amount of $50 billion, claiming that will consider the question of waiver of certain commitments made at recent negotiations on the expansion of trade with the United States.

The reproach, which said on Sunday the state Agency Xinhua, came after weekend Chinese officials held talks with the American delegation headed by trade Minister Wilbur Ross. The talks were the third round of discussions between the two countries after the start of the trade summit.

USA almost nothing is told about how there took place the meeting of the Ross with Beijing, stating on Monday that the delegation will make a report and receive guidance on next steps. During his visit, Ross indicated “a clear purpose trump in achieving fair trade relations with China,” according to a statement from the White house.

According to the review, China Radio International, the government’s position in relation to the repeal of any of the agreements reached in the negotiations in case the rates trump will enter into force, is a “red line”.

To blame NAFTA?
Donald trump just killed the trade Union of their actions. 25% tariff on steel and a 10% tariff on aluminum, which the Bush administration used to strike at the economy of Canada and Mexico, not to mention EU, this weapon is the destruction of the trade unions. The only negotiating position that works against Donald trump, is the ability and the desire to leave.

Every time when they talk about trade, at least one ill-informed reader blames NAFTA for the loss of manufacturing jobs.

The number of people employed in manufacturing 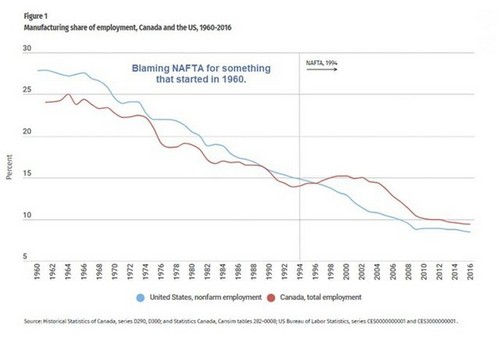 The production decrease in the percentage of employment began in 1960 for the US and Canada.

Trump complains that “the U.S. is losing the status of” on trade with Mexico. The above graph shows that trump is wrong.

Moreover, cheap supply of parts help to reduce car prices. Consumers spend the savings on more. In the course of all jobs created, not lost.

The US was preparing to invade Syria from 2006