USA are the most prolonged and severe crisis in history. Never before has the growth of government spending did not coincide with the cycle of rate hikes. What could be the consequences?

The U.S. is in the worst crisis in its 242 years of existence. This is the opinion of one of the authors econimica.blogspot.com.

Such a statement he makes based on the ratio of U.S. debt to GDP.

Of course, based on the statistics on the labour market, the dynamics of the markets and so on, it can be concluded that the financial crisis ended in 2013, however, Federal spending continues to significantly exceed tax revenues, and therefore, the growing ratio of debt to GDP. Moreover, the growth of debt to GDP forecasts and confirm Budget office of USA (CBO).

In fact, if the economy was so strong, according to the American authorities, the growth of spending and the budget deficit would stop increasing rates. But in our case we have the opposite picture, which, by the way, just looks scary.

We see the growth in Federal spending on higher rates. Because these costs are financed by new loans, the cost of these loans increases. By the way, this occurs in the US for the first time.

In the diagram, which will be given below, it is clear that each deficit period, followed by periods of austerity, when Federal spending was limited, and the economy flourished. 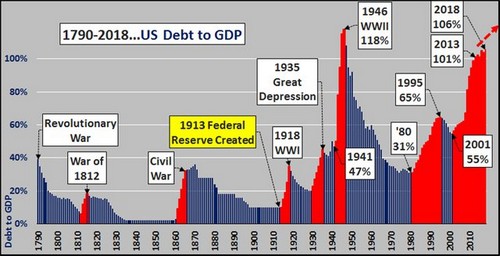 However, since 2001, based on the dynamics of debt to GDP, the U.S. is in the longest-running crisis.

The rapid growth of expenditures and government debt to GDP accounted for postwar periods, and this is understandable. However, after the 1980s, America has grown up and matured, but the government and the Central Bank did not want to see this change. The graph below shows the debt to GDP ratio along with the dynamics of the total population of the USA and growth in this indicator (the yellow line).

The worst is that since 1968 the Federal government spent a total of about $74 trillion to boost annual GDP to the current $20 trillion. 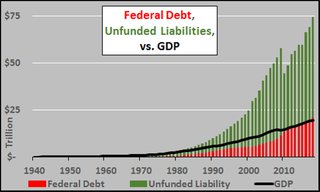 In other words, this $53 trillion in unfunded liabilities: the money has already been spent. And to fulfil the obligations must be issued new bonds.

I should add that all foreigners are less willing to Finance America. According to the latest data from the U.S. Treasury in April, foreign investors have reduced investments in treasuries at the maximum value in January 2016 And Russia did cut them in half. By the way, no one has ever in history sold from half of all available reserves in us government bonds. 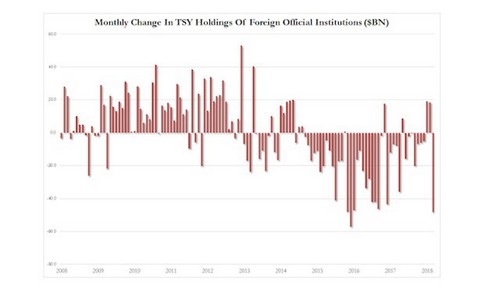 That hides the low unemployment in America?