The UN chief noted that Russia (as the successor state of the Soviet Union – approx. ed.) is one of the key founding members of the UN and “after a short period of a unipolar world” has become a key element “in creating a new multipolar, polycentric world”. 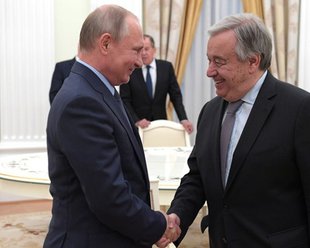 Allow me to welcome you all.

The last time we met in St. Petersburg, I think, a year ago at the economic forum.

Russia now heads the Security Council of the UN, presiding. I hope that the work is structurally saturated is.

You know that we have always been advocating that the UN played a leading, Central role in international Affairs.

These days marks the 70th anniversary of the opening of the UN office in our country. We are ready to continue to work constructively.

A. Guterres (retranslated): Your Excellency Mr. President! I am very glad to visit Moscow.

As you rightly said, Russia is chairing the security Council this month. Now we have two epochal “milestone” moment that can illuminate – is the statement of the President of the Security Council on Ukraine, and a debate on the Middle East that must pass.

Of course, we see Russian Federation as one of the key founding members of the United Nations, is a permanent member of the Security Council of the United Nations. But now we especially focus more on the fact that Russia is an indispensable element of the creation of a new multipolar, polycentric world.

To tell you the truth, now is a difficult time for multilateralism and for the United Nations. In the past, ended the cold war, and there was a short period of a unipolar world, and now we are trying to actively find a new multipolar world structure with relevant multilateral governance structures. And, of course, this raises my serious concerns. I believe that in this process, the Russian Federation should play an active role.