The investigation of the death of “Boeing” completed! ! The public Prosecutor’s office has officially accused Russia of destruction of the Boeing MH-17 and killing 298 people on Board the ship! 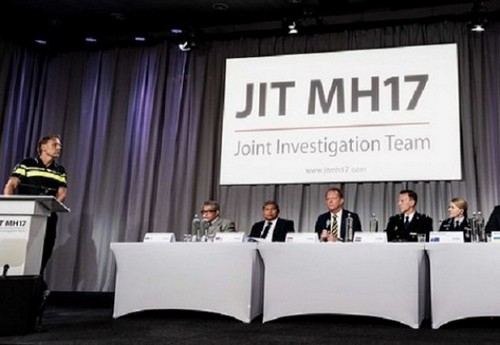 The public Prosecutor’s office established the involvement of more than 100 Russian citizens and local mercenaries of the Russian intelligence services to destroy the ship.

All Russian fakes today decisively defeated, Russia’s responsibility is established, the right of Ukraine publicly confirmed, this is a real victory.

And now open the possibility not only to explain the truth about the “Boeing” – we can prove to the world what terrible consequences brought Ukraine a Russian invasion and war. What’s next? It is necessary to continue the legal offensive against Russia. And now Russia can not recognize, can create a new fake, but the data will be used in a judicial sentence and after the relevant procedures will be carried out by courts around the world. In addition to material compensation can now be brought to justice Russian war criminals! And material damage to the Russian Federation can be stated and Ukraine. This will be one of the most resonant processes in the history of war crimes.

On the eve of the world Cup in Russia, the leadership of the Russian Federation and the state found guilty of heinous crimes, mass murder, terrorism! And how will it be now be combined with the sports festival?!

Thank you to the participants of the international investigation team from Ukraine, thanks to the staff of SBU and GPU, thanks to experts of the Kiev scientific research Institute of forensic expertise, you did a great job, which we should be proud of and which deserves the highest praise and awards from the state and the people of Ukraine.

What’s new in the investigation of the crash of the Boeing MH17?

In the investigation of the crash MH17 new information. Investigators first called specific unit of the Russian army, who belonged to the “Buk” shot down a Malaysian airliner.Four years after the collapse of the “Boeing” MH17 “Malaysian airlines” that crashed in the Donetsk region on July 17, 20014 years, investigators unveiled the details about the specific origin of the shot down aircraft missiles.

Rocket launcher “Buk” with which the plane was shot down belonged to the 53rd antiaircraft missile brigade, based at Kursk. This at a press conference in the Dutch Utrecht on Thursday, may 24, told representatives of the joint investigation team (JIT) investigating the crash.

New details of the investigation

At a press conference the head of the police investigations Department of the Netherlands Wilbert Paulissen, JIT has carefully studied all the available photo and video anti-aircraft missile complex “Buk”, c which, according to the investigation, was fired a rocket, got in Malaysian Boeing. “We were able to establish that this SAM has unique characteristics, said Paulissen. – On the basis of these characteristics of JIT were able to identify the distinguishing features of this “Buka”.

After analyzing numerous photos and videos posted on social networks, the investigators recreated the route of movement “Beech” in the period from 23 to 25 June 2014 in a convoy of military equipment from the military unit at Kursk in the town of Millerovo in the Rostov region. According to JIT, the convoy left the military base June 23, 2014. “It was a large convoy, consisting of nearly 50 different vehicles, including six “Beech”, – said in the presentation that JIT presented at a press conference.

On some of the video “clearly shows that a huge technique prevents the traffic on the road and attracts attention, – said in the presentation. – This explains the fact that in social networks there are so many images column.”

As JIT found “BUK” that shot down the Boeing

The photos and videos that were analyzed, the investigators, the visible license plates and other distinctive features of military vehicles in the convoy, including the transport markings on the body. One of the “Books” heading in the column also appeared on photographs taken on 17 and 18 July on the territory of Ukraine. Investigators recognized him by the set of unique distinguishing features that make up the transport marking SAM.

Comparing these characteristics with the characteristics of other “Books” of the same type in service with the Russian and Ukrainian military investigators “concluded that the BUK missile system that shot down the Boeing MH17, belongs to the 53rd antiaircraft missile brigade, stationed at Kursk”, – said Paulissen. He also said that in 2014, the 53rd brigade was composed of three active battalions. They served several hundred people, including staff and support units.

What is known about the 53rd brigade

Despite the fact that this is the first official statement of the investigators about the origin of the missile that downed the plane, EN route flight MH17 from Amsterdam to Kuala Lumpur, the data itself is not new. In November 2014 expert and journalist group Bellingcat published the results of its investigation, according to which “Boeing” MH17 was shot down by a Buk, which was adopted by the 53rd anti-aircraft missile brigade near Kursk.

Experts later Bellingcat has published another report in which he told details about 53rd brigade. According to their information, in 2014, each of its three battalions was part of a full complex “Buk”. In the column, seen on June 23-25, transported installation “Buk”, other military equipment, and also soldiers and officers of the second battalion. The convoy was heading for the military airfield of Millerovo. Subsequently, the technique, moving in a convoy was transported to the countryside to the border with Ukraine.

As explained in an interview with DW Bellingcat founder Eliot Higgins, investigators from the JIT took longer to identify the origin of the “Beech” shot down MH17. This is so, says Higgins, they should carefully verify the information collected, especially given that Russia does not recognize any evidence. “Investigators need to be 100 percent sure that whatever they imagine is completely correct, because it is necessary to admit a mistake – and the Russian authorities will put pressure on them,” said Higgins.

The findings of the JIT and Bellingcat coincided

Commenting on the report released on Thursday the results of the investigation, Higgins said that the involvement of the 53rd battalion to the collapse of the Malaysian Boeing are quite obvious. When comparing “Books” and JIT experts Bellingcat paid attention to the same signs, such as damage to the hull, the paint, the arrangement of the rooms and marking. “It is very unlikely that in that location was another identical to SAM with the same distinctive characteristics”, – summed up the founder of Bellingcat.

Representatives JIT meanwhile recognized the validity of previous findings of Bellingcat and explained why it took them so long to release information about the “bouquet” of the 53rd brigade. “The findings of the JIT should be based on a legally convincing facts that can be presented in court. It takes a long time to collect and verify these facts”, – said Paulissen.

JIT urged the public to help in the investigation

Representatives JIT also noted that the accident investigation has entered the “final phase” and appealed to the public to report known information about the 53rd brigade deployment, “Beech” shot down the Malaysian Boeing, and the persons who were directly or indirectly related to the crash.

“We are convinced that many people are aware of this information, it can be the soldiers of the 53rd brigade, their friends and relatives”, – said Paulissen, promising that all information of informants will remain confidential.

According to Higgins, even one witness can play an important role in the investigation. “I think the group JIT does not do it out of desperation, but because he wants to achieve the best possible results. Because it compete with Russia, and Russia will try any possible tactic to go on the attack”, he suggested.

China is trying to bribe U.S. deal over $70 billion