Saudi Arabia did not save the economy of Jordan, providing an aid package of $2.5 billion However, king Salman tried to make it look like real assistance was provided. 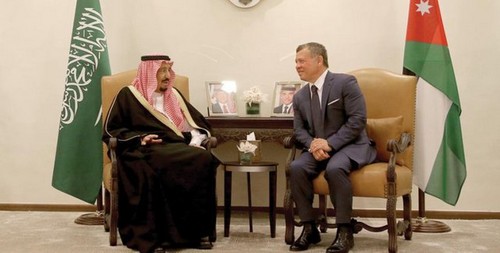 It was an attempt of king Salman to take credit for the payment of money that is already promised Kuwait. The result was a struggle of competing countries of the Persian Gulf to support Jordan.

King Abdullah has sent an authorized person to Kuwait even before he burst into street protests due to rising prices and an increase in income tax, said a source close to the Royal court of Jordan. The state Secretary of Kuwait was in Jordan during the protests, in Kuwait promised to pay to the Central Bank of Jordan $500 million, and promised another $500 million for loans with a low percentage.

The next step was from Qatar. Sheikh Tamim bin Hamad al-Thani, the Emir of Qatar, called on Abdullah to offer “substantial financial support” to Qatar. This was not done at the request of Jordan, which was still hoping that Saudi Arabia will allocate the funds. 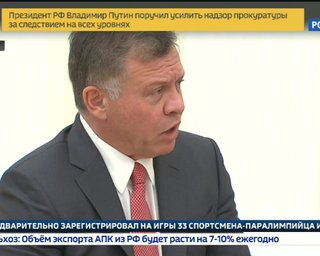 Vladimir Putin on Thursday met with Jordan’s king Abdullah II. Opening the meeting Russian President said that in 2018 we will mark 55 years since the establishment of diplomatic relations between the two countries.

Today the Minister of foreign Affairs of Qatar, Mohammed bin Abdulrahman al-Thani and Minister of Finance of Qatar arrived in Jordan for talks on the aid package. This is the first such visit since Jordan has downgraded relations with Qatar as a result of pressure by Saudi Arabia, which was to create a blockade a year ago.

The Ministry of foreign Affairs of Qatar stated that Qatar had decided to support the economy Jordan, created over 10 thousand jobs and pouring $500 million.
A few hours after the step of Qatar, grasping the direction of Qatar, king Salman called on Abdullah. In the subsequent meeting was attended by the Emir of Kuwait Sheikh Sabah al-Ahmad al-Sabah and the Emir of Dubai and Prime Minister of UAE Mohammed bin Maktoum.

King Salman called on the de facto ruler of the UAE Mohammed bin Zayed, but he refused to come, and the UAE was represented by bin Maktoum.

Thus, the Royal court experienced a certain “degree of frustration” in the background of response of Salman, because Jordan has already received from Kuwait and $1 billion, they expect more from Saudi Arabia, given that the Saudis stopped funding Jordan for two years.

First, king Salman was in a panic when he realized that the vacuum Saudi regional leadership fills his rivals in the Persian Gulf. Kuwait tried and failed to play the role of mediator in the crisis caused by the blockade Qatar by Saudi Arabia, UAE, Bahrain and Egypt. But he was also in conflict with the US and Israel because of Gaza.

The US blocked a statement which calls for an independent investigation of the killing of Palestinian demonstrators on the border with Gaza. The statement was made in Kuwait, a non-permanent member of the security Council.

The attempt of Saudi Arabia to intimidate and subdue the cooperation Council of the Gulf countries have managed, the country was able to split it. Now Kuwait is pursuing its own policy, based on a degree of independence that was not there before. The same can be said about Qatar. The reaction of Kuwait in Jordan is another sign that between him and the Saudis do not have much understanding.

Secondly, this means that king Abdullah, who was in Kuwait on Tuesday, has less to do with Saudi Arabia after this aid package than everyone thinks. Saudi Arabia has allocated Amman not such a big amount as suggested by the title, about $2.5 billion.

Yes, Saudi Arabia has 400 thousand Jordanians, their remittances make up 10% of the GDP of Jordan. But Jordan has other sources of funding from the Gulf countries, which are closer to important for Jordanians issues than Salman.

The political reorientation of Jordan

King Abdullah understands that his legitimacy is not due to a simple purchase support to its people. He should consider the will of their people in terms of the political course of the Kingdom more than ever for the whole period of his reign.

The protests last week and the ongoing conflict with the tribe Beni-Sahra, whose leader fares al-Fayez, was arrested on Saturday after an appeal to political changes, became the signal for the king, saying that he was no longer assume the loyalty of his people than for granted. Al-Fayez violated an unwritten rule of public attacks on the king.

He said not only that he wants “to change the political formula”, he added: “We do not want you, Abdullah, as king, Prime Minister, defense Minister, chief of police and the Governor. You have become everything. You are practically a demigod, according to this Constitution, and we the slaves”.

He also reminded the king that his family had with the land, which is now the territory of Saudi Arabia. Jordan is all that remains of the Kingdom, from which once he fled his family.

Political dissident light Shubeilat poured salt into the wounds of the king, telling the Lebanese newspaper al-Akhbar that Jordan was ousted Saudi Arabia as the military citizen of Israel.

Such blatant abuse of Royal power is not accidental. They are reminiscent of the Royal court that public opinion in Jordan, not so easy to buy these days.

What I think the Jordanians, makes sense, and it is also a factor limiting the influence of Salman, because as an absolute monarch, he has no concept of what civil society or public opinion.

For various reasons, such as the Eastern shore and the Palestinian part of the Jordanian population strongly against the support of Saudi Arabia, claims of Israel that the Palestinian refugees have lost their right to return.

Whether he likes it or not, but those are not the problems that king Abdullah may come around. Now its legitimacy depends on its role of guardian of the Holy places more than ever.

Saudi Arabia has every reason to believe that the tide of public authorities in Jordan can easily spread across borders. The growing importance of Kuwait and Qatar as independent players of the Persian Gulf and donors to Jordan also gives king Abdullah the chance to carry out political reform in Jordan. If he won’t appear ominous portents.

Why USA are in a severe crisis?