On Friday, Chinese President XI Jinping and his Russian counterpart Vladimir Putin during a meeting in Beijing at a high level discussed the further development of Russian-Chinese relations. 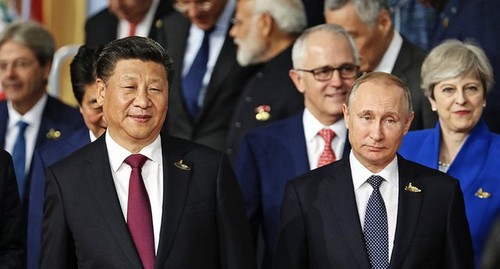 Now Putin is on a state visit to China. Saturday and Sunday he will take part in the 18th summit of the leaders of the Shanghai cooperation organization (SCO) in the East China city of Qingdao.

Both leaders agreed that China and Russia must adhere to the concept of eternal friendship and ideas of strategic coordination, deepen cooperation in all fields.

On Saturday – the second day of Vladimir Putin’s trip to China. Yesterday the President joined the national cuisine of this friendly country, and even himself tried to cook Chinese dumplings with pork. The first dumpling was not perfect.

Si congratulated Putin for a new term as President of Russia expressed his gratitude that he chose China as the first country in which he arrived on a state visit after winning the elections. Also, XI called the China-Russian strategic partnership a “stable and Mature”.

Regardless of the international situation, China and Russia always support each other in protecting their core interests, deepen cooperation in all fields, actively involved in management on a global level and play a key role in the development of a new type of international relations, creating a community conducive to the common future of mankind, told si.

China is ready to cooperate with Russia and is making efforts to build mutual confidence at a high level, expanding cooperation in all fields, strengthening international collaboration and cooperation, implementation of the concept of eternal friendship from generation to generation. Also, the country is developing a strategy to coordinate the two countries and daily maintains bilateral relations to benefit the two peoples, said XI.

On the background of the concerted efforts of cooperation between China and Russia in various fields, increases integration of mutual interests, said XI.

Both sides come to important results in the framework of the initiative “One belt and one road” with the Eurasian economic Union, said XI.

Both countries need to consider new ideas and methods of implementation of the comprehensive cooperation and benefit the two countries in the political relations of high level to achieve more effective results through cooperation, said XI. He called for strengthening cooperation among people, to cultural cooperation in order to deepen the friendship between the two peoples.

China and Russia, permanent members of the UN Security Council, to protect the international order in accordance with the purposes and principles of the UN Charter, advocating democracy in international relations, committed to the political settlement process in hot spots and continue to play an active role in maintaining world peace and international strategic stability, said XI.

China is ready to cooperate with other member States of the Shanghai cooperation organization, including Russia, in order to use the summit in Qingdao for the further development and strengthening the “Shanghai spirit” and to ensure the stable development of the SCO.

Stressing the comprehensive strategic partnership of Russia and China, which remains a priority of the diplomatic interests of Russia, Putin noted that both countries cared about the key interests and major issues of each other, have actively promoted dialogue and cooperation in political, economic, social and cultural spheres, working closely in international processes.

Russian-Chinese relations are a good example of relations between States in the modern world, which played an important role in maintaining peace, security and stability, Putin said.

According to him, Russia is ready to strengthen cooperation with China in economy, trade, investment, energy and infrastructure.

He noted that Russia appreciates China’s efforts for developing cooperation between the SCO member States, and also supports China in carrying out a successful summit in Qingdao.

According to Putin, Russia would like to develop closer cooperation with China in international and regional interests, as well as at the international level, including the UN, BRICS and G20.

The two leaders discussed the situation on the Korean Peninsula and the nuclear issue of Iran.

The negotiations were attended by Vice-Premier of China, member of the Politburo standing Committee of the CPC, Han Zheng.

Before the talks, XI held a ceremony outside the Great hall of the people in downtown Beijing, which was attended by President Putin of Russia.

After the talks, XI and Putin signed a joint Declaration, witnessed the signing of bilateral cooperation agreements and talked to the press.

Russian-Chinese relations remain the basis of modern interstate relations, coordination between the two countries is a key factor in maintaining strategic balance and stability in the world, said in a joint statement.

In a statement the two countries said that they intend to support the joint efforts of the international community to combat terrorism, extremism, a number of traditional and new threats and challenges.

China and Russia reaffirm their determination to participate in counter-terrorism processes, to abandon the politicization and “double standards”, I agree to create a United front against terrorism.

This is stated in the statement, the two countries that oppose the sabotage of the principles of fair competition, as well as against the blackmail and pressure, damaging the world economy.

Both countries feel that they should be guaranteed the territorial integrity of Syria must respect its sovereignty. Russia and China intend to continue coordinating the efforts for a peaceful solution of the Korean Peninsula.

Disappointing the fact that the United States unilaterally withdrew from the nuclear deal to Iran, the statement said, which added that China and Russia will do everything to protect the transaction and to consider the importance of protecting the interests of all parties involved in the economic and trade cooperation with Iran.

Cancer registries in Russia and Europe