The administration of Donald trump tried to lower expectations from the planned Monday in Helsinki meeting between the US President and Vladimir Putin.

“It’s not the summit, said US Ambassador to Russia John huntsman in an interview with NBC on Sunday. – I heard that it is called the summit. This meeting”.

The pressure on trump intensified after the presentation on Friday the charges against 12 employees of the Russian intelligence service of hacking into the computer systems of the Democratic party, the state election Commission and a company providing software to check voter, writes Bloomberg.

A number of Republicans urged trump to strongly put before Putin a question about interference in the elections, while lawmakers from the Democratic party urged the President to refuse from participation in the summit.

John Bolton, national security Advisor to trump, said the President of the United States would be “foolish” to demand the extradition of Russians, as urged by some lawmakers and others.

Bolton also said that the U.S. does not expect “concrete results” from Putin on Monday. The meeting will be “generally unstructured,” he said.

According to trump, he has no big expectations from the trip to Helsinki.

The huntsman, speaking at the transfer of Fox News Sunday, said he expects the Russian “pernicious activity” in the election – including in the US and voting for Brexit in the UK – will be “one part” of the agenda on Monday.

It is expected that the presidents will discuss a wide range of other issues – from international efforts to control arms to the presence of Iran in Syria.

In General, the in itself meeting, of course, the most important political event in the relations between the two countries, however, the internal pressure on Donald trump remains very strong. Such political situation in the country will remain at least until elections in the fall.

If we talk about market expectations, that is to say that the ruble and the Russian market in General lately steadily grew, laying on positive expectations. But do not forget that often in fact going on profit-taking, especially at this stage, any major changes may not be.

It should also be said that the strengthening of the ruble, the reduction in OFZ yields and the growth of the Russian stock market passed on rather favorable external background.

We will add that in the US in the present context of political relations with Russia is quite tense. The white house is at odds with a team of spectacular Robert Mueller, who reportedly were trying to interview the President of the trump. At the same time, on the eve of the November elections in the U.S. Congress both concerned about the risk of “further Russian intervention”. 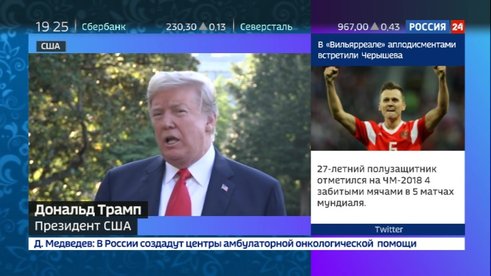 The US President Donald trump on Tuesday took off in Grand tour of Europe. First he will attend a two-day NATO summit in Brussels, then travel to the UK, whereupon Finland will host a meeting with Vladimir Putin.

Russia is irreplaceable in the new multipolar world