The President of the United States Donald trump wants to hold bilateral talks with Russian President Vladimir Putin in July this year. 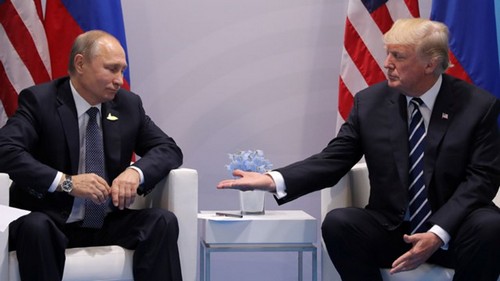 This is with reference to sources in the administration, trump said a number of American media. In particular, Bloomberg cited comments trump made on June 21 that the White house “assess the possibility of meeting next month”.

The Agency also cited the comments of a number of unnamed “reliable sources” that a meeting between the leaders of Russia and the United States could take place in July in the framework of the European tour of trump, when he will attend the NATO summit in Brussels, and will make his first official visit to Britain.

The edition of the Washington Examiner and several other media reported that in late June, will visit Moscow the adviser of the US President for homeland security John Bolton, including to discuss such a meeting at the highest level.

The official representative of the national security Council, USA Garrett Marquis confirmed that John Bolton is scheduled to visit Moscow during the European visit and discuss the possibility of a meeting between trump and Putin.

On June 25-27, U.S. National Security Advisor John Bolton will meet with U.S. allies in London and Rome to discuss national security issues, and travel to Moscow to discuss a potential meeting between Presidents Putin and Trump.

Prior to that, the possibility of bilateral meetings at the highest level were discussed during the telephone talks the leaders of Russia and the USA at the end of March 2018.

Team trump interferes with the meeting, US President Putin

Assistants of the President of the United States ignore the wishes of trump to start preparing for a new meeting with Putin soon after the summit in Vietnam in November 2017, the newspaper The Washington Post.Although the President of the United States Donald trump is clearly expressed the intention to start preparation for the meeting with Russian President Vladimir Putin, aides trump ignored the wishes of the chief, announced on Saturday, June 16, the American newspaper the Washington Post, citing an unnamed source in the White house.

According to the interlocutor of the edition, trump has set his subordinates the task to organize a meeting with Putin in November 2017, after talked with him on the sidelines of the APEC summit in the Vietnamese da Nang. “After the meeting, the President said that he would like to invite Putin to the White house. We ignored them”, – shared information by a senior official.

The idea of trump to hold a new meeting with Putin has not caused enthusiasm among his advisers in the Council of national security of the United States. In the end, they decided to temporarily ignore the wish of the President, and to organise meetings, only if trump will once again require it. “They decided: let’s wait and see if he re-raise this issue,” – said the official.

The meeting could take place in July

Meanwhile, the meeting of the presidents of the United States and Russia could still take place in July, when trump will arrive in Europe for a NATO summit. This was confirmed by the publication of one of White house officials and two diplomats familiar with the plans trump. The place of meeting is still unknown.

Donald trump and Vladimir Putin met in person twice – at the G20 summit in Germany last summer, and then at the APEC summit in the Vietnamese da Nang in November. The discussion of the possibility of a new meeting of leaders began in the spring of 2018, after a phone call from Donald trump to the Kremlin.

Then the American President invited his Russian counterpart to meet at the White house. Information about that meeting and then confirmed in the Kremlin and in the White house, but talks about the organization of the summit was delayed.

The immigration crisis will deprive Germany of the Chancellor?

The EU will have to solve “the Dublin puzzle”