The Russian President has concluded his visit to Austria, dedicated to the 50th anniversary of the signing of the first contract for the supply of natural gas from the Soviet Union to Austria. 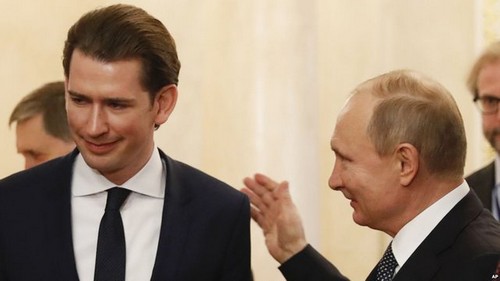 In the course of which he met with representatives of the local business, the President of Austria, Alexander van der Ballena and Federal Chancellor of Austria Sebastian Kurtz.

Following the talks, Putin said that his visit to Austria testifies to the absence from Moscow of lack of trust. According to him, Russia remains open to cooperation with European countries.

However, he also mentioned that sanctions, and any politically motivated restrictions, protectionism is harmful to all, including themselves initiators.

Russia and Austria will expand the bilateral relations. Now Russia is the second investor in the Austrian economy after Germany. According to Putin, a good rapidly growing trade and energy cooperation between the two countries.

July 1, Austria assumed the chairmanship in the EU Council, that is why the issue of anti-Russian sanctions was the key to the talks between Putin and van der Ballena and Kurtz.

“Dialogue with Russia is very important not only for Austria but also for the EU. Russia is a real part of Europe,” said Austrian President.

He noted that for him, good relations between Austria and Russia – this is a personal matter, because his ancestors from the late seventeenth to the early twentieth century lived in Russia.

At the same time, he noted that Austria would adhere to the EU on the issue of anti-Russian sanctions.

“We live in times of increased tension. Austria committed itself to contribute to détente. But I must say that Austria on the issue of sanctions adheres to the EU” – said Austrian President.

The same opinion was shared by the head of the Austrian government Kurz in negotiations with Putin. At the same time, he expressed the hope that progress in the implementation of the Minsk agreements will allow “step by step to lift the sanctions” that were imposed by the EU against Russia in connection with events in Donbass.

“This is the scenario we want to achieve for our continent,” said Kurtz. We are firmly convinced that our continent can only develop together with each other, but not against each other,” he added.

For his part, Putin assured Kurtz about Russia’s openness to cooperation with Europe and recalled that until recently worked a set of mechanisms and instruments of interaction between Russia and the EU.

“Now it’s almost all collapsed, and the collapsed is not our fault, we are not the initiators of the collapse of this interaction. Gradually, little by little this work is revived, we see that. We have consultations and dialogues with representatives from Brussels on a number of fronts. They are, in my opinion, very constructive, though not easy,” – stated Putin.

As for sanctions, they are harmful for everybody, so all parties have an interest in their abolition, Putin said.

“And those who initiate and those against whom directed these actions, which we call sanctions, they are harmful for everyone. I seem to be interested in cancelling them all, and so are we. We understand and are aware that individually each of the countries of the European Union it is difficult to talk about it, but everything that happens in this area prevent us from developing relations with Austria,” – said Putin.

Economic ties between Russia and Austria

Gazprom and Austrian gas company OMV signed an agreement on deliveries of Russian fuel until 2040. The document was signed on results of negotiations of Vladimir Putin and the Chancellor of Austria, Sebastian Kurz. The President of Russia on an official visit in Vienna.

In his opinion, in regard to the expansion of economic ties between the two countries “still have a huge potential.”

“We have very good prospects. I am sure that they will be implemented”, – said the head of the Russian state.

Assessment of Putin, the current relationship between Moscow and Vienna “are developing well, steadily”. For example, he cited the fact that Russia is the second investor in the Austrian economy after Germany.

He also drew attention to the fact that a large Russian market may be even greater due to the countries of the Eurasian economic Union (Belarus, Kazakhstan, Russia, Armenia, Kyrgyzstan).

According to him, the trade turnover between Russia and Austria “is growing at a good pace”. “Thanks to the cooperation with the Soviet Union and then with Russia, Austria has become a European energy hub, and actively growing. In this sense, the significance and role of the Republic of Austria in the European energy market is significant significant and will only increase”, – said the Russian leader.

He expressed confidence that the prospects for development of relations not only in energy but also in mechanical engineering, woodworking, transport, logistics. The two countries have a plan that includes about 20 areas of cooperation, Putin said. 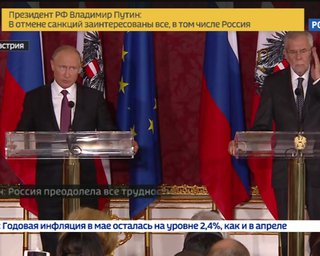 Vladimir Putin arrived in Austria. This is the first foreign visit of the Russian President after the inauguration. The trip is timed to the 50th anniversary of the beginning of natural gas exports from the Soviet Union to Austria.

A key focus of the talks was devoted to the issues of Russian gas supplies to Austria and to the European market. The cooperation between Gazprom and the Austrian oil company OMV confirmed the importance of gas supply and overcomes any difficulties, said following the talks, the Chancellor of Austria.

The Austrian President said the two countries ‘ cooperation in the field of gas supplies as an example of “outstanding cooperation”. He also said that he sees no reason to replace Russian gas with supplies of more costly liquefied natural gas (LNG) from the United States that impose Europe, some American politicians.

“Often do not take into account that us LNG in two, if not three times more expensive than Russian gas. In this regard, from a purely economic point of view does not make sense to replace Russian gas with American liquefied natural gas,” said van der Bellen.

The Russian leader reminded of the continuity of supply for half a century and that through Austria for the transit of Russian energy resources to the markets of other European countries.

“Thus, it is no exaggeration to say that joint efforts of Russia and Austria contribute to the energy security of the entire European continent,” Putin said.

“Continues the project “Nord stream – 2”. “The Federal Chancellor confirmed that the Austrian leadership commends this project as purely economic,” said the Russian head of state.

But at a meeting with representatives of Austrian business, he also stressed that Gazprom and OMV “is ready for joint implementation of the pipeline system “Northern stream – 2”, this will minimize the transit risks and ensure the European economy an additional amount equal to 55 billion cubic meters.

Qatar will invest $15 billion in the Turkish economy