The US President Donald trump said that his meeting with North Korean leader Kim Jong-UN could still be held on the 12th of June as previously planned.

About this American leader told reporters at the White house on Friday, may 25, reports Radio Liberty. 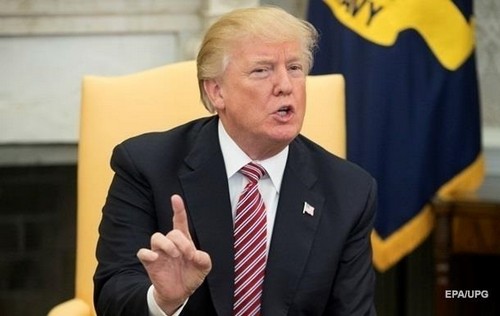 The US President stressed that all sides are interested in his meeting with Kim.

“They really want to do this, we want to do it. All play games,” said trump.

We will remind, on may 24, the President of the United States Donald trump has canceled a meeting with North Korean leader Kim Jong-UN, which was to be held on June 12 in Singapore.

Representatives of the United States arrived in Korea to prepare for the meeting, trump and Kim

The US delegation headed by US Ambassador to the Philippines intends to discuss North Korea preparing meeting Donald trump and Kim Jong-UN. Earlier, trump did not rule out the possibility of disruption of the event.Representatives of the United States arrived in Korea for a meeting of the American President Donald trump, and North Korean leader Kim Jong-UN. On Sunday, may 27, writes the Washington Post. The delegation was headed by US Ambassador to the Philippines soon Kim, who previously worked as Ambassador to South Korea, Reuters reported, citing familiar with the situation source.

A meeting between the two countries at the highest level offered in March, the leadership of North Korea. In early April the DPRK to meet its leader in complete secrecy called for Mike Pompeo, who at that time held the position of head of the CIA.

Previously, trump has hinted that does not exclude the possibility of disrupting the summit, the US and North Korea, scheduled to take place on 12 June in Singapore. However, on the night of 26 may, the US President wrote on Twitter about the “very productive talks with North Korea to return to conducting” activities.

Associate of the leader of the DPRK in the framework of the visit to the White house on Friday will give Donald Trump a letter from Kim Jong-UN.

The North Korean delegation, headed close associate of the leader of the DPRK Kim Yong Chol Donald trump will be announced on Friday.

Press Secretary of the White house Hogan Gigli said Thursday night that details of the meeting are still to be agreed. It is unknown whether trump Kim Yong-Chul in the oval office.

It is also not known and the contents of the letter Kim Jong UN to trump.

Trump hopes to meet with Kim Jong-UN, in Singapore on June 12 and force it to abandon its nuclear program. On Thursday, he also recognized that you may need more rounds of direct negotiations.

“I’d like to have it done in one meeting. But often agreements don’t work like that. There is a very good chance that it will not be done neither the one, nor two, nor three. But at some point it will be done,” said trump.

Trump confirmed the holding of the June 12 summit in Singapore

Kim Yong Chol, who holds the post of Deputy Chairman of the Central Committee of the workers ‘ party of Korea, became the first representative of the leadership of the DPRK, arrived in the United States over the past 18 years. North Korean General says Donald Trump a letter from Kim Che-UN. On its content the US President refused to speak, mentioning that the message “very nice” and “very interesting.” He later added that he had not discovered it, reports AFP.

Earlier the North Korean state news Agency KCNA issued a statement, according to which Kim Jong-UN remains committed to nuclear disarmament and reiterates “constant, steady and firm will” of Pyongyang to a denuclearization of the Korean Peninsula.

25 may trump suddenly announced the cancellation of the summit in Singapore, and it happened just a few hours after Pyongyang detonated its nuclear testing ground “of Pungere”. Donald trump explained this decision by the hostile actions of the DPRK. But the next day announced that the summit may still take place.

How many ways of destroying learned in the APU

Trade war trump is a gift to China