‘Can you read that car registration number that’s 20 metres away?’ It’s one of the basic requirements of the practical driving test.

But it appears many drivers are suffering from diminished eye sight that they cannot remedy, as the DVLA confirmed that 42,519 car and motorcycle licences had been revoked or refused since 2012 because of the the holder’s poor vision.

Some will have been due to medical conditions but many due to drivers failing roadside tests. 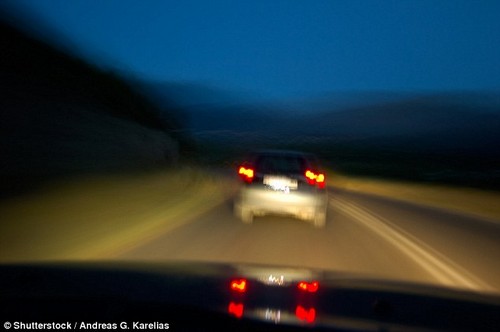 Can you read the a number plate from 20 metres away? Some 42,519 car drivers and motorcyclists had their licence taken away between 2012 and 2016 because they couldn’t meet the minimum vision requirement set by the DVLA

The figures, confirmed by the Driving and Vehicle Licencing Agency, also showed that 6,739 bus and lorry drivers had their licences pulled after failing an eyesight test in the last five years.

The stats were released following a Freedom of Information request by Optometry Today.

It was a steeper rise in revoked licences for ‘group 2’ HGV drivers – some 893 bus and lorry operators had their licence taken away in 2012 while 1,298 suffered the same fate in 2016, which is an increase of 45 per cent.

In a statement concerning the stats the DVLA said it is difficult to draw generalised conclusions around the increase in the number of drivers being called out on their poor vision, though minimum medical standards connected with driving were introduced in 2013.

It told the OT, ‘The changes introduced more stringent standards in some cases but more relaxed standards in others so they were not expected to result either in a significant number of people losing or regaining their entitlement to hold a licence.’

The DVLA also stated that it was a driver’s ongoing legal duty to notify the agency of any medical condition that may affect their ability to drive safely, including limitations concerning their vision.

It suggested conducting the 20-metre number plate test on a regular basis and arranging appointments with the optician when necessary.

Drivers are urged to book an eye-sight test every two years to ensure they meet the legal standard for driving, according to the Association of Optometrists.

Trevor Warburton, AOP clinical adviser, told the OT: ‘In the UK, there is currently no requirement for drivers to have regular sight tests.

‘We believe that compulsory vision screening for all motorists would help ensure that drivers’ vision meets the required standards, significantly reducing the risk of someone having an accident due to their poor vision.’

Confused.com agreed with Mr Warburton’s suggestion, siting its own previous research that found that 55 per cent of drivers think it should be a legal requirement to have regular eye tests.

‘It’s easy to view eye testing as just another inconvenience and added expense to the rising cost of motoring, but substandard vision can have a significant impact on driving ability, if not treated,’ said Confused.com’s Amanda Stretton.

‘Without the correct prescription, motorists may have trouble judging distance, depth and could miss cars, cyclists and pedestrians in their wider field.

‘They may also void their insurance policy if they do not notify their insurer of any conditions.’

Minimum eyesight standards for all drivers, according to the DVLA

The law requires that all licensed drivers to meet the following eyesight requirements (including drivers aided by prescribed glasses or contact lenses):

Any driver unable to meet these standards must not drive and must notify the DVLA, which will refuse or revoke a licence.