Four in five households are priced out of buying a bog standard newly-built home in London and the South East because house prices are so high, research suggests.

Estate agent Savills claims that to be ‘affordable’ even to just 40 per cent of buyers a new-build property would have to cost £250,000 or less.

But it warned that ‘the average new home in the south of England is not a mass-market product’ and they are largely priced at similar levels to existing homes. In London the average house price is £435,000, while further out of the capital prices average around £290,000.

Savills: There needs to be substantially more land being released for housing development in the higher-demand areas

According to Savills, it means that just 20 per cent in the least affordable areas can afford to buy a new property, with an undersupply of new homes being built exacerbating the problem.

The biggest reason for this, it claims, is not inactivity on the part of builders, but the chronic shortage of land released to build new homes on in this area.

Nationally, new homes volumes are up almost 50 per cent on three years ago, meaning that new housing supply is almost meeting demand across most of the UK.

But London and South East regions are bearing the brunt of the shortfall – accounting for 104,000 of the 2016 total – which puts immense pressure on affordability.

The Savills report said: ‘Across much of the country, housing supply is almost meeting demand. In places with less stretched housing affordability, there was a shortfall of only 5,000 new homes.

‘But in places where demand is high and affordability is stretched, there was a shortfall of 104,000 homes.’

This is pushing the price of land in London and its surrounding areas up and consequently, new home prices are spiralling out of reach of the vast majority of ordinary families.

A study by Yorkshire Building Society recently found that at a national level, housing affordability has been almost flat over the past 10 years – a 0.6 per cent improvement – but while in England it has worsened by 3.3 per cent, it has improved by 18.9 per cent in Scotland and 17.2 per cent in Wales.

In London, it has declined dramatically, however, with affordability worsening by 38.8 per cent since 2007, as house prices have rocketed but wages have stagnated.

Across Britain as a whole a home costs 7.8 times average wages, the same as in 2007.

But the study, which compared local house prices against local wages, said that in some areas of London and the South East, this ratio is closer to 20 times. 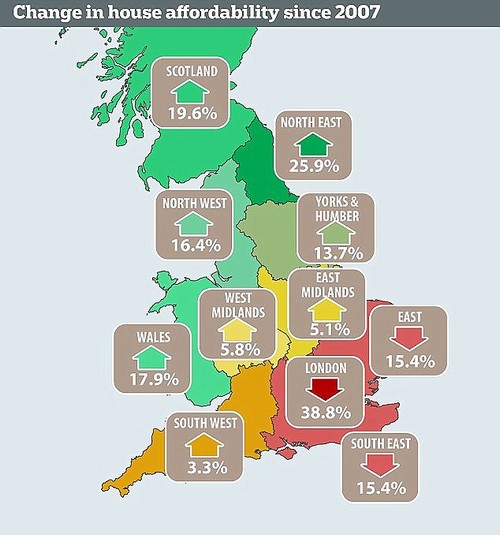 The chart shows how housing affordability has changed since 2007, according to the Yorkshire BS study that compared local house prices to local wages

Writing in a report called On track to solving the housing crisis Chris Buckle, director of Savills residential research, said: ‘To solve the problem of undersupply in the South East, there needs to be substantially more land being released for housing development in the higher-demand areas.

‘Increased supply of land would reduce the level of competition, lower land values, and enable new homes to be sold at levels the mass market can afford.’

However, Buckle acknowledges that the South East is constrained by environmental and landscape designations.

There should be consideration of a program of green belt swaps
Chris Buckle, Savills

To address the issue, he argues that the Government should force local planning authorities to free up more land for development, including in the green belt.

Buckle said: ‘Balancing the protection of valued landscapes against the need for more housing is a regional problem and needs a regional, market-led strategy.

‘In addition, there should be consideration of a program of green belt swaps.

‘The Government must provide leadership on these issues if sufficient land is to be found to make a real impact on the housing crisis.’ 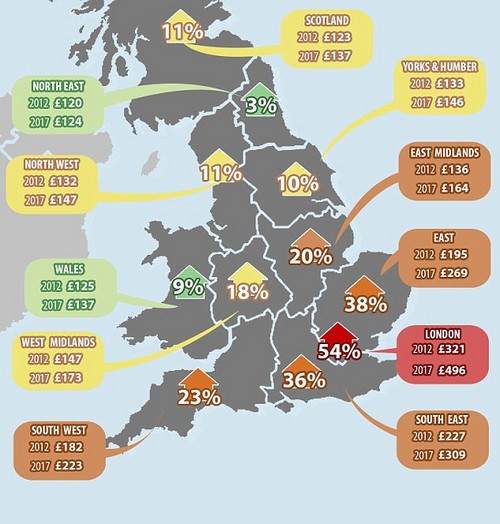 The disparity in house prices is further illustrated by this map, which shows the average growth in price per square foot across the regions since 2012

What about affordable and social housing?

The Savills report came as Prime Minister Theresa May used her Conservative party conference speech to announce £2billion in fresh funding to build 25,000 new affordable social rented homes over the next five years.

This is in addition to the £10billion already committed to funding more Help to Buy by providing equity loans for deposits to buyers.

Her big reveal on ‘fixing the broken housing market’ was met with mixed reviews, with many pointing out that her claim to support ordinary people achieve the ‘British dream’ of home ownership has little to do with providing more homes for those renting in the social sector.

Others have welcomed the social housing funding on the basis that public money is likely to attract private funding to new developments, promoting the development of other types of homes too by addressing the up front infrastructure costs that can so often stall building projects.

Steve Partridge, director of Savills housing consultancy team, said: ‘The Government clearly recognises that we have a housing crisis and need a broad range of measures to fix it.

‘We will need to work through the detail of how the additional £2billion will be brought forward, but any contribution to building more affordable homes has to be welcomed.

‘It has been assumed that this will attract £5billion in additional funding, and we would imagine an assumption that there would be no land cost if these homes are to be built out on local authority land.

‘Of particular note is the reference to additional funding being directed to ‘where need is greatest’ and how that is measured.

‘We know from our research that there are 100,000 emerging households per year unable to access market housing, the majority in London and the South East.’ 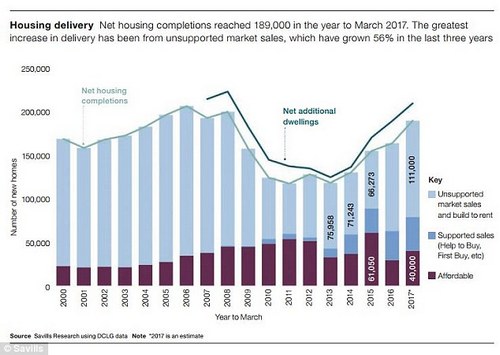 Government aid, particularly in the form of interest-free five-year Help to Buy loans to buyers of new-build homes, has helped boost the number of homes being built over the past couple of years.

The biggest increase has been in the number of homes being built without public funding, both market sale and built to rent units, up from only 62,000 in 2015 to an expected 111,000 this year – an increase of 79 per cent.

The Savills report does detail evidence of high delivery sites in high demand areas across the South East.

These include sites in Andover (Picket Twenty), Aylesbury (Berryfields) and Bedfordshire (King’s Reach in Biggleswade), where homes are priced at a discount of up to 15 per cent compared to the local market on an average price per square foot basis.

Each of these sites completed more than 600 new homes for sale in the past three years – a build-out rate significantly above average.

Even in high-demand areas, such as Cambridge and Horsham, there are large numbers of homes being sold at a discount to market averages on a per square foot basis, the firm’s researchers found.

‘To build on this momentum, policy needs to go further, and our report contains some uncomfortable truths,’ said Buckle.