The biggest MoT car failures in the UK have been revealed – along with the regions with vehicles most likely to flunk the test.

It comes as critics warn that the Government’s controversial switch to making the first roadworthiness tests after four years – rather than three as at present – will put lives at risk by leaving 385,000 ‘unsafe’ cars on the road.

Analysis of more than 400m MoT records from the Driver and Vehicle Standards Agency (DVSA) by consumer website HonestJohn.co.uk show that one in six cars fails its first test, with brakes, lighting and tyres among the most-common reasons.

Four-wheeled failure rates: These are the top 10 UK places where cars are least likely to pass an MoT

The records were made public following a Freedom of Information request that had initially been refused by the authorities.

Geographically, Romford in Essex, has the highest MoT pass rate in the UK with London and the Home Counties generally faring best.

Locations with the highest MoT pass rates in the UK

The HonestJohn report said: ‘Proposals for extending the date of a vehicle’s first MoT from three to four years would allow up to 385,000 unsafe vehicles to remain on the road.’

Daniel Powell, managing editor of HonestJohn.co.uk said: “Many of the common failure items are down to general maintenance, rather than a particular fault with the car.

‘The Government’s proposal to extend the first MoT from three to four years will effectively give irresponsible motorists a free pass to drive dangerous cars for an additional 12 months, without any mandatory safety checks.’

The report says: ‘Controversial planned changes to the MoT test will increase the number of unsafe vehicles on Britain’s roads.

‘The Government’s plans to extend the annual roadworthiness test from three to four years – which is currently undergoing a consultation period – could mean 385,000 vehicles that would have failed their first MoT will slip through the net and remain on the road unrepaired.’ 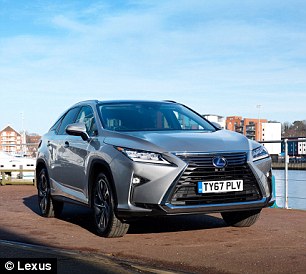 DVSA stats said the Lexus RX 450h SUV (left) is most likely to pass its first MoT. The previous generation Peugeot 5008 MPV (right) has the worst pass rate of any car sitting its first test

The cars most and least likely to pass their first MoT

MOST LIKELY TO PASS

Commenting on its own findings the report said: ‘One in six cars were refused a roadworthiness certificate during the first MoT, with most failing due to unsafe brakes, lights and tyres.’

It added:‘The Essex town of Romford has the best MoT pass rate in the UK, while all of the towns and cities in the top 10 were located in the South-East.

‘By contrast, the two areas with the highest fail rate (Kirkcaldy and Dundee) were in Scotland, while failure rates were also high in the South-West, with six towns and cities in the region in the bottom 10’.

HonestJohn’s Mr Powell said: ‘While the research may initially suggest that if you want to pass your MoT first time, you should jump in your car and drive it to Romford, there are other factors at play here.

‘Drivers in and around London, for example, generally cover a much lower mileage leaving less likelihood of wear and tear, while household incomes are often higher, meaning many people own newer cars.’

He added: ‘In less wealthy areas, some aspects of car maintenance can often be overlooked, whilst in more remote parts of the country the mileage covered between MoT tests is often much greater.’

Lighting issues are the reason why 169,000 cars fail their MOT test each year, according to DVSA stats acquired by HonestJohn.co.uk

The report said publication of the MoT files for the first time in three years followed a Freedom of Information request ‘and protracted fight with the DVSA to make the data public’.

It noted: ‘Success in this long-running battle means that for the first time in years owners and prospective buyers have detailed access to the latest MoT records and reasons for failure.

‘It means that consumers can easily spot common failures by make, model, year of registration and postcode based on real world data.’

For full details of the research see HonestJohn.co.uk/mot

Buy-to-let has skewed housing market and must be curbed, says thinktank