Nissan is turning over a new LEAF – adding to its core electric range with its first battery-powered sports utility vehicle.

The prototype all-electric zero-emissions Nissan IMx crossover, with a claimed driving range of more than 373 miles, was unveiled today at the Tokyo Motor Show in Japan and marks the start of a wider LEAF EV family.

Although Nissan bosses were also flagging up its fully autonomous features, once the hype is stripped away, the reality for motorists is that this car will form the second addition to the green LEAF range. And more are expected to follow. 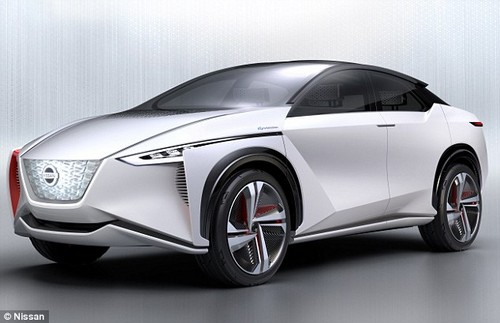 Green SUV: Nissan IMx will be the Japanese brand’s first all-electric family-size 4X4 and will sit alongside the second-generation Nissan LEAF

The IMx was one of a raft of electric models launched at the biannual Japanese motor show – where the Honda Sports EV concept was also revealed.

It comes after the second-generation of the standard Nissan LEAF, to be built in the UK, was unveiled in September ahead of going on sale in January with a 40kWh battery and a 235 mile range – 80 miles more than the outgoing LEAF – and a price to around £20,000.

A more powerful version with a 310-mile range is also planned.

Nissan said the latest IMx prototype SUV is propelled by a pair of high-output electric motors at the front and rear, giving it all-wheel-drive capability.

The combined 320 kW of power and 700 Nm of torque comes from a high-capacity battery which has been ‘redesigned and re-engineered for increased energy’.

Nissan said: ‘This new battery supports a driving range of more than 600 kilometres (373 miles) on a single charge, so occupants can enjoy an extended adventure without worrying about recharging.’ 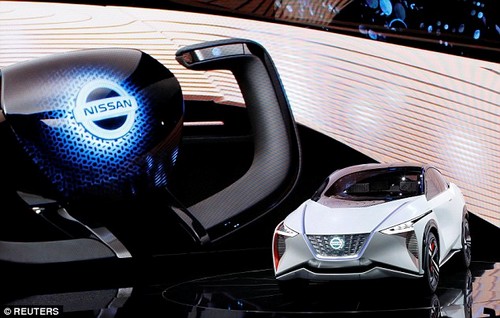 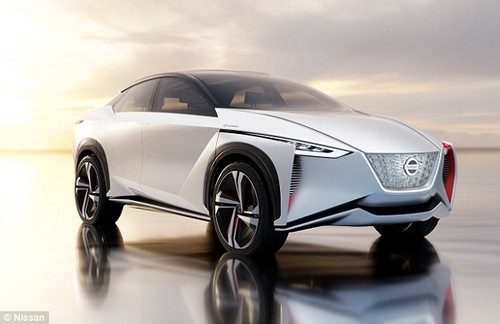 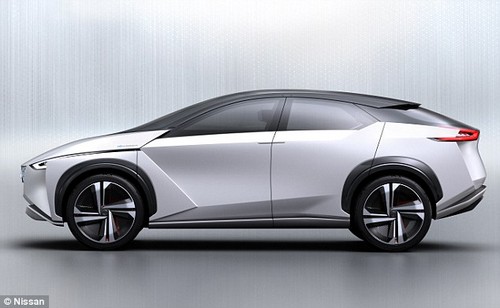 The IMx prototype SUV has a pair of high-output electric motors at the front and rear, giving it all-wheel-drive capability to match the off-roading looks

‘Nissan is committed to changing the way people and cars communicate, as well as how cars interact with society in the near future and beyond.’ 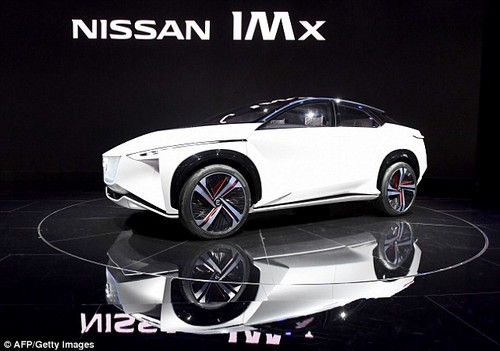 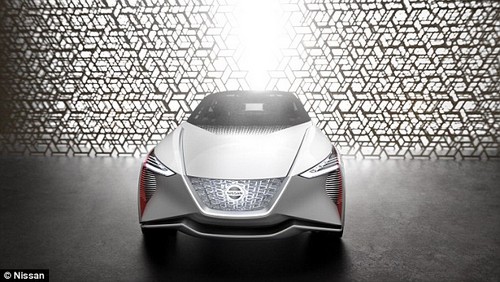 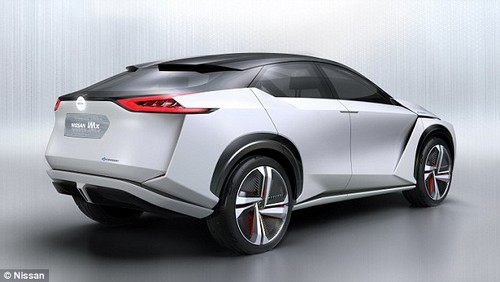 When it does make production, the IMx will feature Nissan’s latest autonomous driving technology

Nissan said: ‘When ProPILOT drive mode is selected, the system stows the steering wheel inside the dashboard and reclines all seats, giving the driver more space and allowing the vehicle’s occupants to relax and enjoy their commute.

‘When ‘Manual’ drive mode is selected, the vehicle returns the steering wheel and seats to their original position, seamlessly transferring control back to the driver.’

Under Nissan’s self-driving vision for the future, an autonomous IMx could transport its owner to the airport, park itself in a spot where the vehicle can connect to the local power grid and act as a virtual power plant by returning electricity to the grid.

‘Once the owner returns, the IMx can pick them up at the terminal and drive home. The whole process is carried out efficiently, thanks in part to the increased battery capacity and connected-car technologies,’ the Japanese brand added. 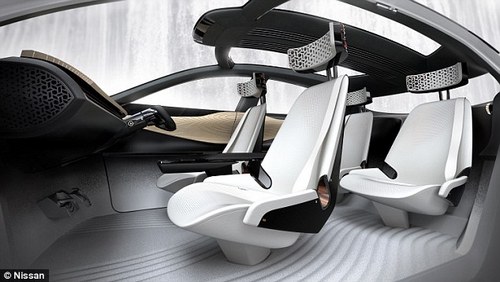 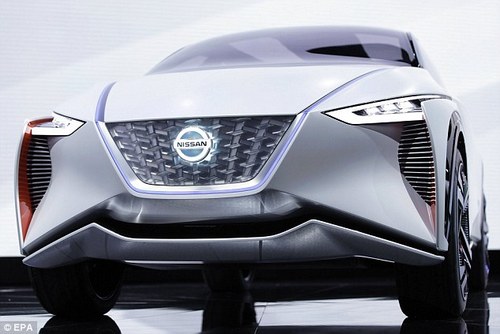 The front end is extremely Lexus like, with tall vents below the headlights and an angular bumper shape., The glowing Nissan logo hints at its electric heartbeat 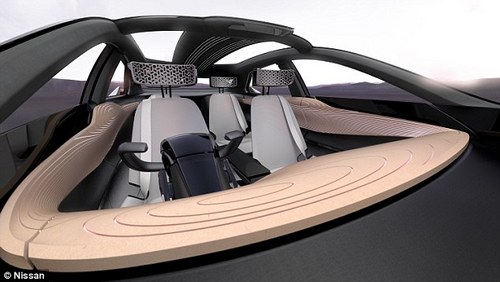 Traditional Japanese art and culture has played a part in the vehicle’s design, Nissan explained.

The designers took inspiration from the Japanese concepts of ‘ma’ – a sense of space and time, and ‘wa’ (harmony), to create a car expressing both ‘stillness’ and ‘motion’.

This includes accent colours that are claimed to be inspired by the ‘beauty and extravagance found on the inside of traditional Japanese kimonos’.

Another eastern influence is the open-plan interior, which is based on a traditional Japanese house. 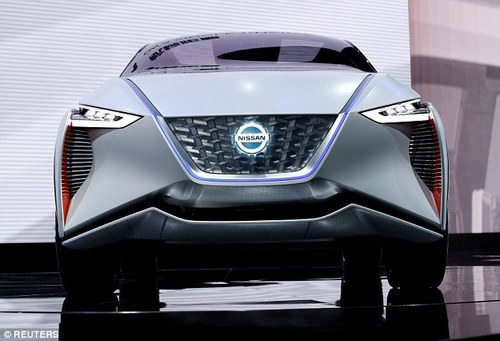 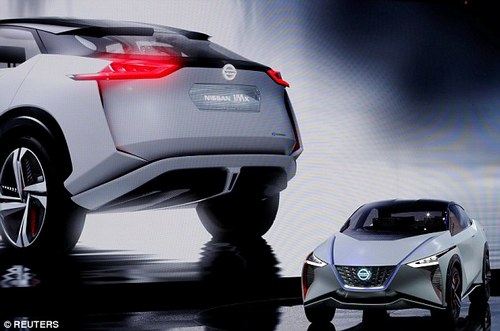 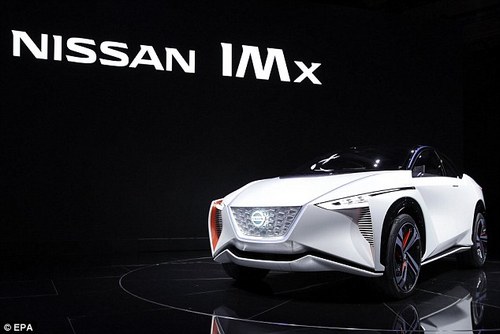 Nissan hasn’t given any indications of when the IMx is likely to be in showrooms, but expect it to be sooner rather than later as the Japanese brand looks to ramp-up its zero-emissions effort

The car’s panoramic hi-tech instrument panel displays a view of the external environment in the background. But a separate, wood grain-patterned display, sitting below the instrument panel and wrapping around the interior door trims, takes its cue from a traditional Japanese paper screen.

The diagonal pattern on the seats has been delicately etched with a laser cutter while the head rest – patterned like a Japanese interlocking wood puzzle – is made from silicon-based cushioning and a frame produced by a 3D printer.

‘This intuitive interface results in fewer physical controls and switches, making the cabin of the IMx simple yet highly efficient and adding to its supreme comfort.’

UK: What to Expect From a Prime Minister Corbyn