Hot hatchbacks need to do it all.

Of course, they must drive with heart-racing excitement, powering across deserted B-roads with the tenacity of a sports car, boasting both grip and engine power in spades.

But they must also be practical enough to be used all the rest of the time; tackle trips to the tip, the school run, five-up journeys to the coast. All while offering a comfortable ride, upscale interior and low running costs.

The best hot hatchbacks have always been the ones to offer the broadest reach of talents. With Hyundai becoming the latest brand to enter the fray with the impressive i30N, which are the top dogs it needs to beat to become the top-choice hot hatch? Read on to find out… 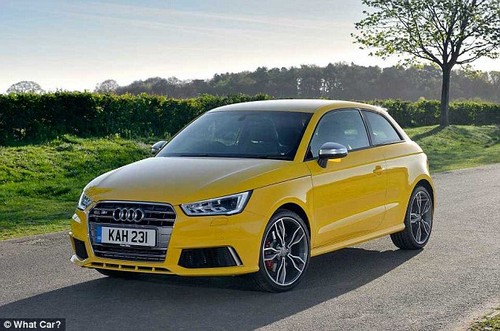 The S1 is Audi’s dinkiest hot hatchback. At £26,640 it’s more expensive than an entry-level BMW 3 Series

A supermini with a 228bhp turbo engine and four-wheel drive equals serious straight-line acceleration that’s enough to better even some larger hot hatches such as the Volkswagen Golf GTI.

The classy interior’s a match for them too, although it’s a pity the ride is firm and the steering doesn’t have much feel. 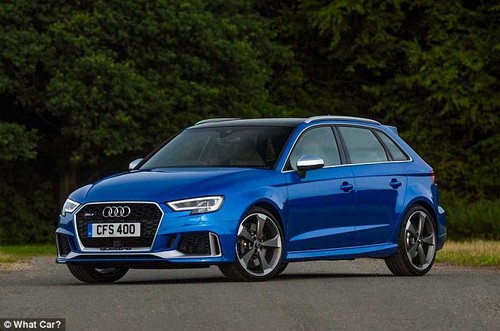 If you want something bigger – and want to fork out a load more money – the Audi RS3 could be the car for you. At a smidgen under £45,000, it’s not cheap

Like its smaller S1 sibling, the Audi RS3 is tremendously powerful – its 2.5-litre five-cylinder engine, nicked from the Audi TT RS, produces no less than 394bhp.

This gives it the acceleration of a Porsche, although the price tag isn’t far shy of one, either. It’s also not as much fun to drive as the cheaper Ford Focus RS. 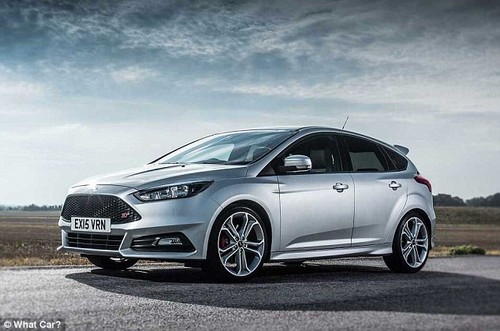 The Focus RS is the ultimate Ford hot hatch, but the Focus ST isn’t far behind. It might be almost 100bhp down on the RS but it will be more comfortable to live with

Like the idea of a Focus RS but can’t stomach its price tag? The cheaper Focus ST aims to offer similar thrills at a lower price.

You can even have a 182bhp diesel to save money on fuel, although the 247bhp turbo petrol is preferable. Both handle well and feel good to sit in, even if the interior isn’t as classy as the competition. 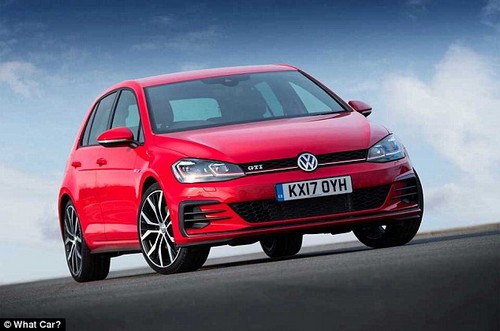 The original hot hatch has been superseded by more potent examples. In fact, there’s a hotter Golf hatchback than the GTI today

The most famous hot hatch badge of all, and the latest model is pretty much as good as it’s always been. There is a price premium, but it’s worth it, not least because the Golf GTI holds onto its value well.

2017 changes have improved the infotainment systems, broadening its appeal yet further. 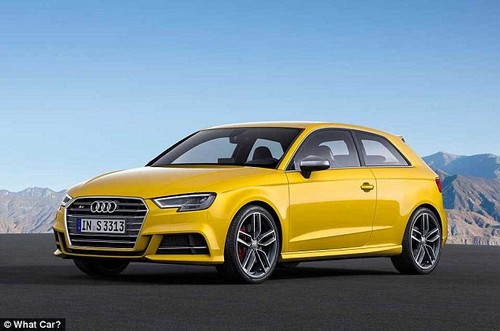 The RS3 might be the most potent of all Audi hot hatches, but the more civilised S3 is a better choice if you’re looking for a daily driver

The Audi S3 sits below the RS3 rocketship, but itself is still fast; 306bhp delivers some of the best acceleration figures in its class, aided by grippy all-wheel drive which also means it’s tenacious even when the weather is horrible.

This does, however, mean some of the traditional hot hatch excitement has been dulled. 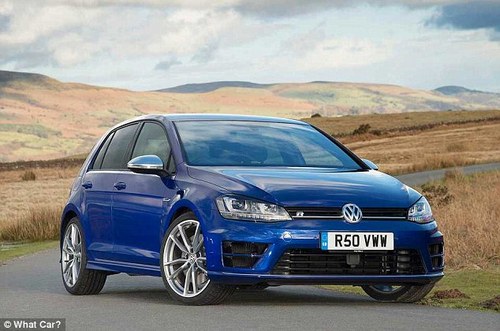 This is the Golf that gazumps the GTI. Volkswagen decided it wanted almost 300bhp from its headline hot hatch and has thrown four-wheel drive into the equation too

The Golf GTI’s more powerful brother, the Golf R has 296bhp and four-wheel drive for a thrilling 0-62mph time of just 5.3 seconds.

It combines this with all the everyday practicality and classy but understated looks beloved of Golf owners. You’ll struggle to find a smarter interior for the money. 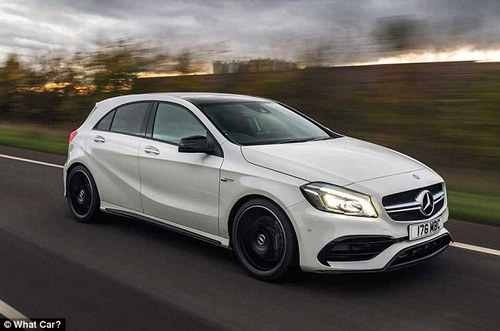 Of all the hot hatches here, the Mercedes-AMG A45 is the most powerful. The four-cylinder twin-turbo engine produces a masive 375bhp. It’s also nearly £42,000

It’s expensive, but with a 375bhp turbo engine delivering crazy levels of acceleration and bombastic thrills by the bucketload, it’s easily justifiable to some.

It corners well too, with loads of grip, and the Mercedes-AMG badge appeal is enviable. You decide whether that’s worth the hefty premium. 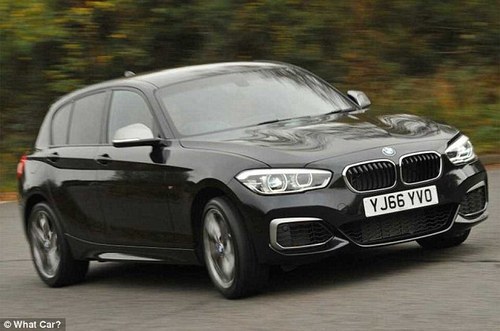 The 140i is the stealth choice of the lot – it really is difficult to tell it apart from a 2.0-litre diesel. But under the bonnet is a glorious six-cylinder turbo petrol that makes the best sound of all the cars in this list

The oh-so classy BMW M140i is an understated understudy to full-fat BMW M cars. It’s sensationally fast, and the creamy six-cylinder turbo engine is an absolute delight to drive.

The chassis is also packed with feel yet the classy BMW also feels like a class act at more moderate speeds too. 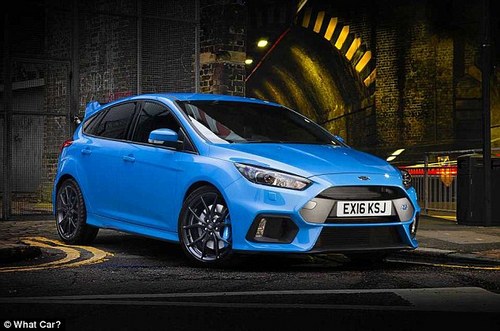 There’s been a lot said about the Focus RS, but it just misses out on the top spot in our list. For £32,000 it is good value against many of the hot hatches in this top 10 countdown

This is a car that carries off all the hype surrounding it. Brilliant to drive, with blistering power, it’s a machine that can do 0-62mph in less than five seconds and also run rings around sports cars through the bends.

Even the price is a surprise: less than £32,000 is a bargain compared to some alternatives here. 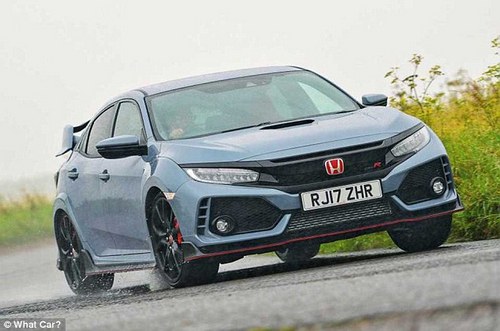 Our winner is the British-built Honda Civic Type R. As well as having a spacious boot and interior it also has superb handling and a spooling 2.0-litre motor

Easily one of the most standout hot hatches to look at, the Honda Civic Type R is a brilliant steer.

The 2.0-litre turbo engine has loads of power and charisma, the chassis and outlandish aerodynamic addenda glue it to the road, yet a well-built and practical interior makes it more than capable of taking tall teens and a massive amount of luggage with ease.

This is the hot hatch that does it all, making it our current class champ.