Unions are calling on the Government to step in after defence firm BAE confirmed plans to cut more than 1,900 jobs.

The British defence giant is shedding jobs across its aerospace, maritime and cyber security divisions, mostly in Lancashire, Portsmouth and East Yorkshire.

The UK’s largest defence supplier has been hit by a slowdown in orders for its Eurofighter Typhoon jet, but is also being shaken up by its new boss Charles Woodburn.

Yesterday the Unite union called on the Government to pledge that long-term military projects would be designed and built in the UK, claiming that as much as 25 per cent of defence spending was set to go to American factories by 2020. 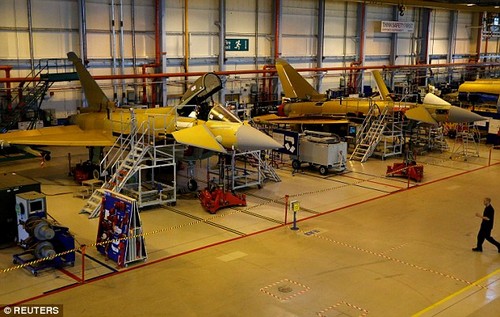 Mayday: BAE has been hit by a slowdown in orders for its Eurofighter Typhoon jet seen here being assembled at its Warton plant near Preston

The union said: ‘These planned job cuts will not only undermine Britain’s sovereign defence capability, but devastate communities across the UK who rely on these skilled jobs and the hope of a decent future they give to future generations.

Unite will not stand by and allow the defence of our nation to be outsourced abroad.’

Yesterday, business minister Claire Perry insisted the Government was not to blame for the job cuts, and pledged to work with the group to keep compulsory redundancies to a minimum.

Former oil industry executive Woodburn, 46, who took over as chief executive from retiring Ian King earlier this year, said the changes were ‘necessary and the right thing to do for our company’ as it adapts to demand and increased competition.

WHERE AXE WILL FALL

BAE plans to cut 1,400 roles from its military air business across five sites over the next three years. The worst affected sites will be Warton and Samlesbury in Lancashire, which includes the final assembly line for the Typhoon, and from where 750 jobs will go.

The Typhoon is the most important aircraft in BAE’s portfolio, accounting for nearly a third of its air unit’s sales last year. Production rates for the Typhoon are expected to be cut with a long awaited order from Saudi Arabia yet to materialize.

France and Germany have announced plans to make their own, next-generation fighter jet. Meanwhile, president Trump is keen to keep costs down for America’s F-35 fighter.

Four hundred jobs are also due to go in Brough, East Yorkshire, amid reduced production rates of the Hawk training plane.

And 245 are planned to be cut at Royal Air Force bases Marham and Leeming, with the RAF Tornado fleet, supported at the site, ending active service in 2019.

BAE is also shedding 340 jobs from its maritime divisions in Portsmouth and the Solent, where it does dockyard work for Navy ships and work on torpedoes and other maritime technology. It said the changes would align ‘capacity with workload’.