“In light of the tragedy last week in Las Vegas, Ryan Murphy and the producers of American Horror Story: Cult have chosen to make substantial edits to the opening scene of tomorrow night’s episode,” FX said in a statement Monday.

“This opening, which was filmed two months ago and which portrays an occurrence of gun violence that has sadly become all too common in our country, contains a sequence that some viewers might find traumatic.”

According to TMZ, the scene featured actor Evan Peters’ character giving a speech at a campaign rally when actress Sarah Paulson’s character opens fire on the rally. A SWAT team then storms the rally, which was filmed in Orange County, California in September.

The network added that while “the edited version of the episode will air on the FX linear channel,” an unedited version would be available to viewers on video-on-demand as well as FX’s non-linear platforms.

At the New Yorker Festival Saturday, Murphy talked about the “graphic” scene that he called “an obvious anti-gun warning about society,” the Hollywood Reporter writes.

“Should you air it? Should you not air it? How do you be sensitive,” Murphy said of wrestling with the decision of whether to cut the mass shooting scene or not.

“My point of view was I believe I have the right to air it, but I also believe in victims’ rights, and I believe that now is probably not the week to have something explosive or incendiary in the culture because someone who was affected might watch that and it could trigger something or make them feel upset. So our decision was to re-edit it and I felt that that was the right move.” 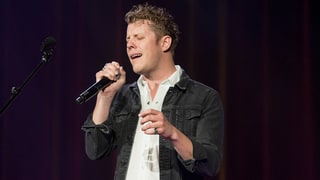