Sony unveiled Blood & Truth today at Paris Games Week. It’s an action thriller set in modern day London, and it’s being developed from the ground up exclusively for PlayStation VR. 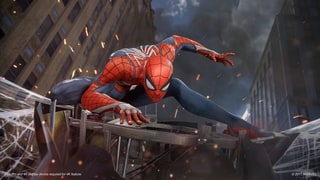 The game focuses on Ryan Marks, an elite Special Forces soldier who is on a dangerous mission to save his family from a ruthless criminal overlord. Stuart Whyte, director of VR Product Development at London Studios, says the game was inspired by one of the team’s earlier projects called PlayStation VR Worlds. Specifically, an experience called “The London Heist.”

“People loved it and reacted really positively to everything the game made possible, from the way you could interact with objects in front of you, to how it made you feel as you played through,” Whyte writes on the PlayStation Blog. “We wanted to build on this feeling and create something really special. While ‘The London Heist’ was a love letter to the classic London east end gangster films, Blood & Truth focuses on the action movie genre and features dramatic scenes throughout the story, big drama moments and the kind of impressive set pieces you would expect from an action blockbuster.”

There’s no word yet on when Blood & Truth will launch.