On the internationally recognized “Day of the Girl,” the Boy Scouts of America announced Wednesday that they would allow girls to join their program. The move would provide girls a path toward the rank of Eagle Scout, the organization’s highest honor. 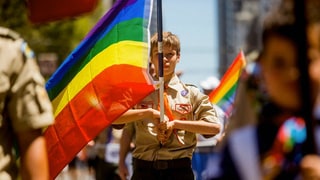 “The historic decision comes after years of receiving requests from families and girls,” Boy Scouts of America said in a statement.

“The organization evaluated the results of numerous research efforts, gaining input from current members and leaders, as well as parents and girls who’ve never been involved in Scouting – to understand how to offer families an important additional choice in meeting the character development needs of all their children.”

Starting next year, the Cub Scouts’ “dens” will allow for all-female or all-male groupings, with the option to integrate or remain single-gender as the children age. An Eagle Scout program for older girls will also be established by 2019.

The decision by the Boy Scouts of America comes after numerous girls, including New York teenager Sydney Ireland, and the National Organization of Woman lobbied the group to accept female members.

“I just want to do what the Boy Scouts do – earn the merit badges and earn the Eagle Award,” Ireland told NBC News earlier this year. “The Girl Scouts is a great organization, but it’s just not the program that I want to be part of. I think girls should just have the opportunity to be a member of any organization they want regardless of gender.”

Boy Scouts of America added, “Families today are busier and more diverse than ever. Most are dual-earners and there are more single-parent households than ever before, making convenient programs that serve the whole family more appealing.”

However, the Girl Scouts of the USA have lobbied against the Boy Scouts’ move, arguing that it’s simply an attempt to bolster the Boy Scouts’ decreasing enrollment, USA Today reports.

In January, in a landmark decision, the Boy Scouts of America announced they would allow transgender boys to enroll in the program. Previously, the Boy Scouts relied on the gender listed on the birth certificate when determining enrollment.

“For more than 100 years, the Boy Scouts of America, along with schools, youth sports and other youth organizations, have ultimately deferred to the information on an individual’s birth certificate to determine eligibility for our single-gender programs,” the organization said at the time. “However, that approach is no longer sufficient as communities and state laws are interpreting gender identity differently, and these laws vary widely from state to state.”