Chance the Rapper, the National and Gloria Estefan are among the artists that will perform at Barack Obama’s inaugural Obama Foundation Summit. The “immersive” event will take place October 31st and November 1st in Chicago. 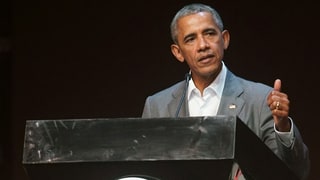 “As soon as I heard about the summit, I jumped at the opportunity,” Chance the Rapper said of the Obama Foundation gig in a video Friday.

“There’s a lot of great things going on in Chicago and I love the collaborative effort of being able to be at some of these talks and hear what people have going on and figuring out how I fit in. The fact that the president is jumping ahead of programming before the Obama Presidential Center gets built is inspiring.”

Chance added, “I’m excited to see Gloria Estefan and the National and – I can’t say right now but – all my friends that are coming, it’s gonna be fire.” Obama recently delivered an empowering video message at one of Chance the Rapper’s concerts.

Visit Obama.org to sign up for the live stream of the Obama Foundation Summit concert.

Watch Barack Obama detail the summit in the video below: