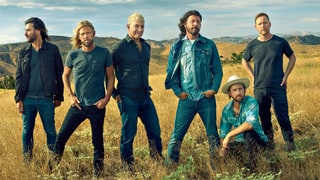 “As a precautionary measure, the scheduled second heart surgery for Jimmy Kimmel’s son Billy had to be postponed this week due to the common cold,” a Kimmel rep said in a statement. “Jimmy is very grateful to Shaquille O’Neal, Dave Grohl, Channing Tatum and Jennifer Lawrence for filling his very small shoes as guest host this week while he, his wife and children sneeze on each other.”

Grohl’s episode will feature the Foo Fighters singer interviewing guests Kristen Bell and shock rocker Alice Cooper, who is also slated to perform. Ty Dolla $ign with YG and Pink are also scheduled to perform during Kimmel’s absence, while Ellen Degeneres, Kim Kardashian and Mila Kunis are among this week’s guests.

Grohl does have some late-night hosting experience as he previously sat in for Chelsea Handler for a handful of Chelsea Lately tapings, first in December 2012 followed by a week’s worth of shows in February 2013.

In other Foo Fighters news, the band announced Monday they would play a New Year’s Eve 2018 concert at Las Vegas’ Cosmopolitan.