Grindhouse co-director Robert Rodriguez said in a statement Friday that he and ex-girlfriend Rose McGowan once schemed to get back at Harvey Weinstein in the most industry way possible: by working together on the 2007 cult flick. 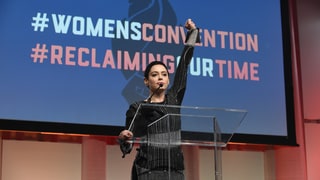 Rodriguez, who dated McGowan from 2006 to 2009, revealed that he knew about the 1997 Sundance Film Festival incident that McGowan made public earlier this month, and that he intentionally cast the actress in a “bad ass” role as a way to spite the media mogul.

The director recounted how he met McGowan at the Cannes Film Festival in 2005 and the pair got to talking about Sin City, which screened earlier that week. When the actress made mention that she was a fan of film noir, Rodriguez commented that she should have auditioned, to which she replied that she had been blacklisted from working on Weinstein movies.

“When I asked what she meant by that, and how could she possibly be blacklisted, she told me the horrifying story of what Harvey did to her seven years earlier,” Rodriguez said in the statement. (McGowan alleged in a series of tweets earlier this month that Weinstein raped her).

“My reaction was one of shock,” Rodriguez continued. “I recall clearly what I said next, ‘My God, why didn’t you say anything? People would have stood up for you! And where was your fiancé during all this? I would have at least beaten the crap out of Harvey if I had heard that.’ Rose said they didn’t know what to do. She confided that a female attorney had told her that because she had done nudity in movies that no jury would believe her and that it would turn into a he said/she said case.”

McGowan explained to Rodriguez that she had been told to sign a non-disclosure agreement not to talk about the incident. Rodriguez said he then came up with a plan – to cast McGowan in an upcoming project he was working on with Quentin Tarantino for Dimension (a division of the Weinstein Company, under Bob Weinstein), which turned out to be Grindhouse.

“Just as I finished telling Rose this, I saw Harvey walking around the party! I called Harvey over to our table, and as soon as he got close enough to see that I was sitting with Rose, his face dropped and went ghostly white. I said, ‘Hey Harvey, this is Rose McGowan. I think she’s amazing and really talented and I’m going to cast her in my next movie,'” the director said. “Harvey then dribbled all over himself in the most over the top performance I’d ever seen as he gushed, ‘Oh she’s wonderful, oh she’s amazing, oh she’s fantastic, oh she’s so talented… You two should definitely work together.’ And then he skittered off. I knew right then that every word Rose told me was true, you could see it all over his face.”

Rodriguez said the hope was that they would make Weinstein “literally” pay for his misconduct, but the film was ultimately “buried” (presumably in terms of its promotion, scheduling and distribution) as part of the now-disgraced producer’s power play.

“It would have been much easier on both of us if we could have just revealed why we were doing it,” Rodriguez said, though neither did due to the NDA.

On Friday, however, McGowan spoke out about her alleged rape at the Women’s Convention in Detroit, Michigan, calling on other women to come forward.

“I have been silenced for 20 years. I have been slut-shamed. I have been harassed. I have been maligned and you know what? I’m just like you,” she said. “Because what happened to me behind the scenes happens to all of us in society and it cannot stand and it will not stand.”