Against Me!’s Laura Jane Grace will be featured in this weekend’s Squidbillies episode with a cover of the Adult Swim animated show’s theme song. The show airs on Cartoon Network at midnight on Sundays. 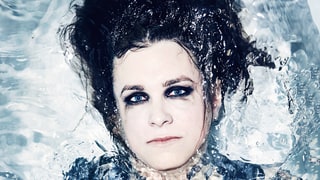 As Alternative Press points out, Grace takes viewers into the studio in a behind-the-scenes video for the song. “It’s fun to sing that line of, ‘Take all you sons of bitches when I go,'” Grace says while laughing. In the clip, Grace plays guitar and tracks powerful vocals.

Squidbillies kicked off its 11th season this month. Artists from across genres have covered the theme song over the years, including Jason Isbell who also guest starred as a preacher in the Season 10 finale last year. Steve Earle led off the new season. Ty Segall, “Weird Al” Yankovic and John Prine are among the artists that will take on the theme song during future episodes this season.

Against Me! are wrapping up their North American fall tour, which culminates at The Fest at Bo Diddley Plaza in Gainesville, FL on October 28th.