Kanye West has been quiet musically in 2017, but the rapper makes a rare guest appearance on CyHi the Prynce’s new song “Dat Side.” The two MCs take turns dismissing haters over a spindly, piano-centric beat. 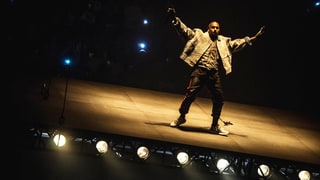 CyHi the Prynce is a longtime West associate, with guest appearances on tracks from the G.O.O.D. Music compilation Cruel Summer and My Beautiful Dark Twisted Fantasy alongside writing credits on The Life of Pablo standouts “Ultralight Beam” and “Father Stretch My Hands Pt. 1.” CyHi the Prynce offers a stream of curt putdowns on “Dat Side”: “All you do is tell stories, you a campfire/ You can barely hold your water, you a damn liar.”

In contrast, West’s contribution is a quick tour through the paranoia-inducing scrutiny that accompanies his fame. “People claim they praying for you, really they be preying on you/ All this shit is weighing on you, don’t look back, they gaining on you,” he raps, rarely pausing for breath. West’s verse ends with a reminder that he is under constant surveillance: “Moved into a neighborhood where I’m the only black guy/ Neighbors said they think I gave the neighborhood a black eye/ They too worried ’bout what I’m doing so I gotta keep my grass high.”

After a prolific 2016, West’s voice has barely been heard this year, as the rapper’s only high-profile guest appearance has been a feature on Drake’s “Glow.” At the end of last year, West canceled the remaining dates on his Saint Pablo tour and was hospitalized for exhaustion. This summer, he filed a $10 million lawsuit against the company that insured his tour, alleging that they refused to pay his claims.

“Dat Side” is slated to come out on CyHi The Prynce’s long-rumored debut album, No Dope on Sundays, but an album release date has yet to be announced.