Summer is in the rearview mirror for everyone in the northern hemisphere except Voice finalist Morgan Wallen, who sings of lazy weekends and wild, hazy nights in his new song “Up Down.” He gets a little summertime boost in this case from party pals Florida Georgia Line, who add a verse and some harmony vocals. 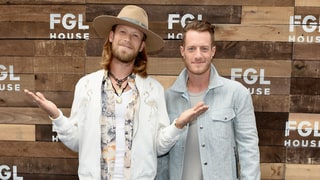 Driven by massive, crashing drums and woozy slide guitar, the tune – penned by Brad Clawson, Michael Hardy, and CJ Solar – revolves around the title hook, repeated in an irresistible, syncopated fashion. It’s linked with the mental escape of fishing excursions, parking lot parties and a slowed-down existence. The bass guitar darts in and out of the chorus, adding a sense of movement and weightlessness, but the notion is one of modern country’s favorites: work hard, play hard, be proud of who you are.

“Up Down” is Wallen’s follow-up single to “The Way I Talk,” which was a top 30 Country Airplay hit. The East Tennessee native’s debut album is expected in 2018.

‘The Deuce’ Recap: The Battle of 42nd Street