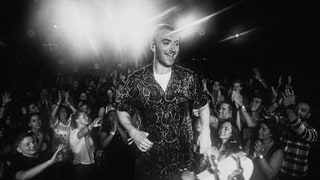 The singer drank too much, battled writer’s block and saw a relationship fall apart – then poured it all into his upcoming LP ‘The Thrill of It All’

On the poignant ballad, Smith sings of heartbreak, regret and longing in the wake of a breakup. “I’ve been burning/ Such a burden, this flame on my chest,” he sings over a melancholic piano melody. “No insurance to pay for the damage/ Yeah, I’ve been burning up since you left.”

In an interview with BBC Radio’s MistaJam, Smith said it was his favorite song from his forthcoming album. “It’s the omst personal song I’ve ever written in my life,” he also revealed.

“Burning” follows his previously shared “Too Good at Goodbyes” and the Timbalind-produced “Pray.” The singer performed both of the songs on Saturday Night Live in early October.

“This album doesn’t sound pretty to me. I want this to be more gritty. I want it to sound older, a bit more uncomfortable,” Smith told Rolling Stone when discussing The Thrill of it All. “In the Lonely Hour is a gin and tonic with your friends. The new album is a whiskey by yourself in a dark room, at night, thinking about life. I went into a deep place. I don’t think I’m going to go into that place ever again, because it got a bit too deep.”