On November 17th, Brooklyn label Daptone Records will release Soul of a Woman, the final album from Sharon Jones. Jones died last November after an extended fight with pancreatic cancer. 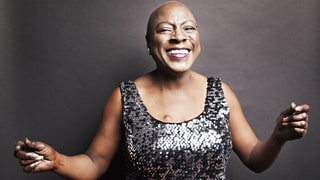 “Between touring and chemotherapy, it was really hard to find time when Sharon felt up to going into the studio,” Daptone Records co-founder Gabriel Roth tells Rolling Stone. “To my frustration, but to her credit, she wouldn’t come into the studio until she was really feeling it. She couldn’t phone it in. Every time that she was counted out, she came back fighting.”

The album mixes white-hot funk with orchestral ballads. “The band was really cresting on stage in the months before Sharon passed,” Dap-Kings bassist and producer Bosco Mann noted. “As a show band, I don’t think any band out there could have competed with us at that level. We hit the studio hot off the road and you could feel it in there. Side one is the more raw live side, while side two is more moody and orchestrated – more of a departure from her carnivorous live persona.”

In conjunction with news of the album’s release, Daptone released a video for the LP’s first track, “Matter of Time.” The song is relentlessly hopeful: “It’s a matter of time before justice will come,” Jones sings. “It’s a matter of time before all wars will be done.” Backing vocalists chime in behind Jones to echo the title phrase, and the horn section toots in cheerful agreement. The video cobbles together footage from tour, including Jones laughing backstage, autographing records and dancing vigorously.

Soul of a Woman features writing contributions from multiple members of the Dap-Kings, Jones’ longtime backing band, often penned while the group was working and living in close proximity on the road. The final cuts were recorded to eight-track tape in Daptone’s Brooklyn studio.

“People always describe the band as ‘tight.’ But it really wasn’t about tightness on this album,” Roth tells Rolling Stone. “It was about looseness; everybody’s not sitting where they’re supposed to sit. Everything’s kind of wild. We wanted to give Sharon that kind of red meat.”

“Every time she took the stage, it always felt like Sharon was leaving it all out there,” Mann added. “So maybe it was more intense for the band towards the end, knowing what was coming, but that’s the only way she knew how to sing her whole life – like it was her last day on earth.”

Roth is quick to point out that Soul of a Woman is not a compilation put together after the singer’s death. “This is a new record,” Roth says. “This is a recording that Sharon and the band put together, not as a farewell. There’s no outtakes on this record.”