Pop and R&B icons remember the career of George Michael in a brief teaser for George Michael: Freedom, a new documentary on the singer. Michael died on December 25th, 2016 at age 53. 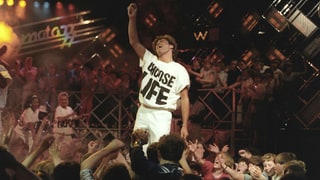 Michael worked on the documentary before his death, narrating the film and co-directing it. The brief trailer for the movie mixes footage of the singer onstage and interviews with famous artists discussing his artistry. “George was authentic,” Elton John declares. “You could hear pain, you can hear joy, you can hear everything in George Michael’s voice,” adds Mary J. Blige.

George Michael: Freedom is set to air on Channel 4 in England on Monday, October 9th before debuting on Showtime for American viewers on October 21st. Stevie Wonder, James Corden, Mark Ronson and Naomi Campbell also appear in the film.

This is not John’s first tribute to Michael: He honored the singer earlier this year on his own Beats 1 radio show. “Not only was he a good friend, but he was probably one of the most brilliant songwriters this country’s ever produced, and certainly one of the best vocalists ever,” John said. “One of the best in the world.”