The Walking Dead‘s Season Eight premiere last week was undoubtedly action-packed; in retrospect, however, you can see how most of the hour was about the bluster before the battle. All the fireworks happened in the last third – and even that was just the opening salvo for what could be weeks of warfare. It’s in this week’s episode – “The Damned” – where the conflict really ramps up, on multiple fronts. And by the closing credits, there’s no sign of any peace treaties getting drawn up any time soon. 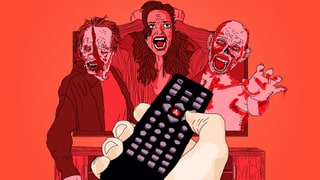 There are two possible ways to look at this chapter: one with more of a positive spin, and one decidedly not. Let’s start with the good. Generally speaking, “war” has been an under-represented genre on television, so if you’re a fan of old shows like Combat! or movies like The Steel Helmet, you probably appreciated that this week delivered one two-fisted fight scene after another. In fact, that’s pretty much all it offered: gun-play and tactical advances, only occasionally interrupted by dialogue.

Frankly, this sprawling, blood-spattered tableau could’ve used more of a frame. Credited co-writers Matthew Negrete and Channing Powell never really clarify exactly where the heroes are positioned, or what their objectives are – which is kind of a problem, because last week’s “Mercy” only offered brief impressions of Rick‘s plan, with nothing explicitly laid out.

That said, director Rosemary Rodriguez attacks this material with gusto, finding memorable ways to illustrate the carnage. The episode begins and ends with an ominous montage of the hero’s faces, each slowly dissolving into the other, while eerie music plays. And while the locales do change between the first fade-in and the final fade-out, the sweaty grimaces really don’t. After a day of slugging it out with the Saviors, the good guys aren’t feeling in the least bit triumphant.

As for those shootouts and raids, Rodriguez stages them with both flair and sensitivity. She’s attuned to the perverse beauty of violence, which is most evident in one shot where the silhouetted heads of two Saviors drop abruptly from view, replaced by flowering bloodstains on the windows of the door they’re guarding. But the director also emphasizes how hard this campaign can be even for an experienced warrior like Morgan, who moves through the mayhem with a glassy stare – more undead than alive. (“I don’t die,” he growls to some of the members of his party, who are concerned that he’s taking on too much risk.)

“The Damned” divides the main characters between different locations, with distinct (if largely unspoken) goals. Maggie and Aaron lead a group on the perimeter of a Savior arsenal, staying at a safe distance behind their armored vehicles as they strategically pick off the enemy – who then turn into zombies and attack the rest of their trapped comrades. With their adversaries distracted, Rick and Daryl sneak into a side door of the Sanctuary, searching for the weapons cache. Meanwhile, in the surrounding fields, Carol and King Ezekiel escape a walker attack and hike to their next target, while scouting the area for any reinforcements who might turn the tide against their people.

During their recon, Carol and Ezekiel talk about his swagger, which he’s aware teeters between overconfident and inspiring. (“Fake it till you make it, baby,” he winks.) That little chat kicks off what in the second half of this Walking Dead will become more of an even split between characters making moves and contemplating their meaning. The chin-stroking is most evident in the scenes between Jesus and Tara, who disagree over whether they should imprison or slaughter the Saviors who they’ve disarmed – especially one that threatened to kill them both. Jesus insists that Maggie would want to show mercy. Tara’s sure Rick wants everyone dead.

Our leader’s actual opinion, however, though may not be so definite. During his excursion into the Sanctuary, Rick is caught up short after he kills a man, and then finds what may be his victim’s baby daughter. (Her name: Gracie. You may begin your exam on intertextual symbolism now.) He stares at himself in the mirror over the child’s crib, and seems repulsed by the man staring back at him. Making matters worse, he’s startled to meet an old acquaintance –Morales, from Season One’s camp outside Atlanta – who warns him that while our conflicted, bearded warrior was pondering the nature of good and evil, the Saviors have been dispatching more troops. 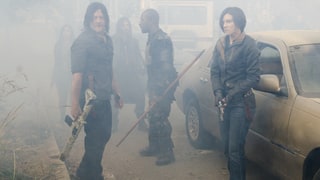 What’s most disappointing about this episode is that there’s really nothing new in all of these metaphorical and literal “Rick looks into the mirror” scenes. We’ve been here before. We’ve heard these conversations. The action in this series is what matters, and what’s most enjoyable to watch. The re-action, however, is getting increasingly stale and predictable. How many times and in how many different ways can these people ask the question, “How much of our humanity are we willing to sacrifice to win?” Why are the writers so sure that this is the most interesting thing about their show (as opposed to, say, the hordes of flesh-eating zombies)?

The quality of the combat this week is high enough to inspire hope for what lies ahead. But in the premiere, the flash-forwards to two possible Rick futures – one idyllic, one dire – suggested that The Walking Dead was ready to rush ahead with its plot, whatever the consequences. Yet here we are again, wasting time with second-guessing. If this is what we have to look forward to for the rest of this season, “all-out war” is going to be hell.

Brad Paisley Geeks Out at Xbox Event in Nashville