UFC Middleweight champion Michael Bisping denies wrongdoing in an alleged gym assault which resulted in him being sued by a 19-year-old male. 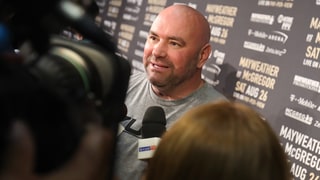 Bisping, who is a little more than a week away from putting his title on the line against Georges St-Pierre in the UFC 217 main event, is the target of a lawsuit from Antonio Georgakopoulos, who claims he was attacked by the fighter who currently owns the most wins in UFC history.

According to the suit, Bisping allegedly choked Georgakopoulos after a conflict at the weight rack inside of a 24-Hour Fitness gym in Anaheim, Calif., this past July. The lawsuit was first reported by TMZ, and was later verified by Rolling Stone.

Georgakopoulos’ claim states Bisping called him multiple profane names and proceeded to grab him by the throat after “taking Bisping’s weights” at the 24-Hour Fitness facility. Georgakopoulos claims Bisping would not release the choke despite an apparent intervention by another person at the gym.

Bisping adamantly refuted his involvement in the situation, stating that the allegations of battery, assault, false imprisonment and intentional infliction of emotional distress are false.

“It is completely inaccurate,” Bisping told reporters Thursday on a UFC 217 media conference call. “It is not factual. I mean, of course, he’s filed papers. I haven’t received any notification. I haven’t been served or anything, but I’ve heard about this. No distraction there (for my fight). Honestly, I’m not losing any sleep over it whatsoever.”

Despite issuing a private persons arrest form, MMAFighting.com reports the Anaheim Police Department did not arrest Bisping because of “insufficient evidence to file a criminal case.”

The UFC, ownership company William Morris Endeavor (WME), as well as 24-Hour Fitness, also are named as defendants in the lawsuit.

UFC President Dana White commented on the situation in a recent interview with RQMS Podcast, and although he admitted to having little knowledge about what happened, he had some bold words for Bisping’s accuser.

“I’ve got to talk to Bisping, but I’m sure it’s that typical pussy who opens his mouth at the fucking gym, then Bisping goes over and – I don’t know what Bisping did to him, but you should have shut your fucking face in the first place,” White said. “Fucking embarrassing – you’re a clown. Guys like him are a fucking embarrassment. You’ve got some meathead saying, ‘Hey, that’s my bench’ and trying to act like a fucking tough guy in the gym. Yeah, he’s such a tough guy that he’s suing Bisping now.”