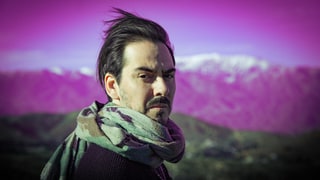 The cinematic hard rocker spanned the sonic spectrum from pounding drums and raging guitars to ethereal vocal harmonies and kaleidoscopic synths. Harrison sang over this psych-tinged milieu with an edge in his voice that still carried a twinge of his father’s dry Liverpudlian lilt, “Even though you’re present in the moment/ Doesn’t mean that you’re not sad and lonely.”

Prior to releasing IN///PARALLEL, Harrison has been involved in an array of musical projects including the alt-rock act, thenewn02, the rock supergroup Fistful of Mercy (with Ben Harper and Joseph Arthur) and various film and TV scoring projects. In 2002, he teamed with Jeff Lynne to complete George Harrison’s posthumous album, Brainwashed.

Harrison will embark on a tour in support of IN///PARALLEL November 6th at the Knitting Factory in New York City.