Eminem tore into President Donald Trump during a ferocious a capella freestyle at the BET Hip Hop Awards Tuesday. Em opened the four-minute deluge with a reference to Trump’s disconcerting “calm before the storm” quip then proceeded to skewer the president over immigration, corruption, white supremacy, the NFL, gun control, environmental disasters and more. 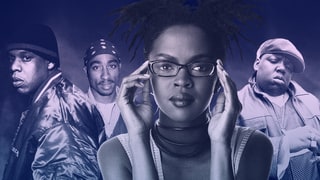 Eminem packed his bars with deft internal rhyme schemes like, “But we better give Obama props/ Cause what we’ve got in office now’s/ A kamikaze that’ll probably cause a nuclear holocaust.” Elsewhere, he capped off lyrical diatribes with pointed punch lines: “Plus he gets an enormous reaction/ When he attacks the NFL so we focus on that and/ Instead of talking Puerto Rico or gun reform for Nevada/ All these horrible tragedies and he’s bored or would rather/ Cause a Twitter storm with the Packers.”

Eminem also tossed in references to Trump’s feud with Senator John McCain, Colin Kaepernick, the recent white supremacist march in Charlottesville and the president’s proposed wall on the Mexican border. The rapper closed with a powerful message directed at his own fans: “And any fan of mine who’s a supporter of his/ I’m drawing in the sand a line/ You’re either for or against/ And if you can’t decide who you like more and you’re split/ On who you should stand beside/ I’ll do it for you with this.” As he finished the line, Eminem brandished a middle finger in front of the camera.