Jon Stewart reunited with Stephen Colbert on The Late Show Monday and tried to provide a positive perspective on President Donald Trump – before inevitably descending into a hilarious rant. 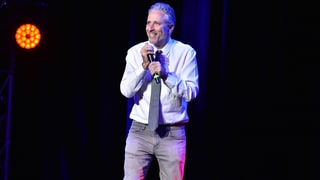 As Colbert pointed out, Trump recently complained on Twitter about the barrage of jokes at his expense on late-night TV, even wondering, “Should we get equal time?” While Colbert deadpanned an answer – “No” – he nevertheless brought out Stewart to balance his own anti-Trump material. However, the former Daily Show host inevitably struggled with to say anything more laudatory than, “Donald Trump is not a cannibal.”

Elsewhere, Colbert cracked: “Last week, we learned that Donald Trump’s own Secretary of State called him a ‘fucking moron.’ Not only is that an insult, he gave away Trump’s Secret Service code name.” Stewart attempted to soothe the burn, but instead stammered, “Given the choice between having hot lava poured into my pee-hole and Donald Trump being president … I choose the latter.”

Eventually, Stewart was unable to hold back any longer. After Colbert played the clip of Trump quipping that this was “the calm before the storm” during a dinner with military personnel, Stewart railed: “How is all this not the storm? And what kind of a sociopath would use that terminology while people are still literally cleaning up from storms!”

Stewart also recorded a quick web-exclusive video, in which he was inducted into The Late Show‘s “Trump Attacked Me on Twitter” Hall of Fame. Trying to keep his emotions in check, Stewart joked: “You know, all the teachers would say, ‘You can be anything you want, you can be president.’ And I said, ‘Well, I don’t know if I want to be president, but I’d like to be someone that the president called a ‘pussy’ on Twitter at 2:30 in the morning.'”