An emotional peak came early in Friday night’s tribute concert to the late Linkin Park singer Chester Bennington at the Hollywood Bowl. At center stage was a microphone stand, draped with a garland of flowers, alone in the spotlight –the crowd of more than 17,000 sang the chorus to the music of “Numb.” The tone was joyous and defiant. Bennington’s absence was never felt more deeply. 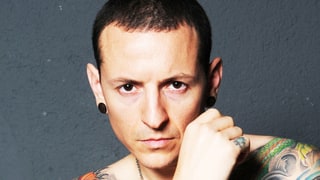 “I don’t have the words,” said Mike Shinoda, the band’s rapper and musical leader, as he greeted the sold-out audience of Linkin Park fans, many of whom flew in from other states, other countries. “I don’t think any of us do.”

What followed was nearly three hours of music in tribute to the band’s soulful lead singer, whose vocal performances were a balance of rage and vulnerability. Mourning his suicide in July at age 41, Linkin Park reconvened for their first performance since his death to celebrate – with some famous friends – the music he left behind.

Among the guests was Blink-182, who had been set to tour with Linkin Park this year. Led by new singer Matt Skiba at the mic, they dove into their own “I Miss You,” as Travis Barker attacked his drums with a driving, dynamic beat. They were joined by members of Linkin Park as Blink’s Mark Hoppus sang a more anxious take on their “What I’ve Done.”

M. Shadows of Avenged Sevenfold raged through “Burn It Down,” in dark aviators and backwards cap. With Avenged guitarist Synyster Gates, the metal singer and Shinoda ripped into “Faint,” and Shadows howled Bennington’s angry, throat-ripping hook: “Don’t turn your back on me/ I won’t be ignored!”

A lesser-known guest rocker was Takahiro “Taka” Moriuchi of ONE OK ROCK, offered one of the night’s truest echoes of Bennington, roaring into the mic, leaping into the air for “Somewhere I Belong.” Shinoda slashed on guitar beside him.

A late addition to the lineup was Sum 41 singer Deryck Whibley, in spiky blonde hair, quickly taking charge shouting, “Linkin Park family, hello! We’re family right? So let’s sing it like family. All right?!” He sang “The Catalyst,” wandering the stage anxiously and singing the Bennington line, “Lift me up, let me go!”

For much of the night, Linkin Park were accompanied by a string quartet. The band’s muscular early hits were well represented, performed with the help of some legit hard rock players (such as members of System of a Down) and proven shouters, including Korn’s Jonathan Davis, whose performance of 2000’s enraged “One Step Closer” was ideally suited to the material. But this was the Linkin Park of 2017, whose newest album, One More Light, was understated and melodic, a direction also championed by Bennington.

That album’s warm, embracing title song provided a theme for the night. During his final tour with the band, his performances of “One More Light” became a moment of communion with fans, as the song began: “Should’ve stayed. Were there signs I ignored?/ Can I help you not to hurt anymore?”

At the Bowl, Linkin Park performed it again, without guests, with Shinoda at a keyboard center stage, as the crowd lifted their cell phones to create a field of stars, another emotional peak.

Some of the concert’s early performances were understandably subdued, compared to the band of its earliest nu-metal tours. There were some unexpected guest turns that took the LP sound in new directions, including Alanis Morissette, who was joined by the dudes of No Doubt for “Castle of Glass.” She also performed a new, unreleased song of her own, “Rest,” focused on the pressures of public life.

On “Waiting for the End,” Shinoda was joined on pop vocals by Sydney Sierota of Echosmith, singing a heartfelt “So many things were left unsaid/ It’s hard to let you go.” There were video testimonials from the likes of Paul McCartney, Metallica and Jared Leto, and a large selection of Bennington footage on and offstage.

Midway into the concert, Shinoda described the moment he learned of his singing partner’s death, and he shared the song “Looking for an Answer,” which he said was written just eight days later. It was in its early stages, still a stripped down piano ballad. And while Shinoda played, he heard his friend’s voice echoed by thousands in the stadium, raging loud and clear.