The mood among Tory MPs returning to Westminster after the conference season has not been so volatile nor the party atmosphere so febrile in decades.

Riven by talk of plots and counter plots against Theresa May, the air is thick with allegations of treachery and double talk from so-called loyalists.

Despite the collapse of the attempted coup last week by former Tory chairman Grant Shapps, which was triggered by the Prime Minister’s calamitous party conference speech, the crisis shows little sign of abating.

Which explains why, with the blessing of 10 Downing Street, Sir John Major rode to the rescue yesterday urging Tory MPs to rally behind the ‘valiant’ Mrs May. 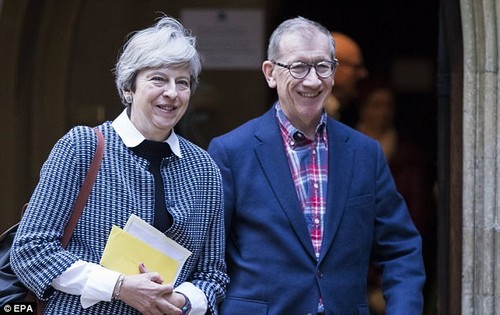 Riven by talk of plots and counter plots against Theresa May (pictured with her husband, Philip at church yesterday), the air is thick with allegations of treachery and double talk from so-called loyalists

Sir John, who himself saw off a leadership challenge from a Cabinet colleague, said: ‘The country has had enough of the self-absorbed disloyal behaviour we have witnessed for weeks.’

The plotting has drained Mrs May’s authority further and led to a plethora of unflattering descriptions by MPs of her position – a paddle boat in a storm, the lamest of lame ducks, and worse.

In the next few days she will seek to stamp her authority on the Parliamentary Party, relying heavily on the increasingly influential Tory Chief Whip Gavin Williamson, who played a critical role in buying more time for Mrs May.

May’s own master of the dark arts

Soon after the disastrous election, Gavin Williamson, the MP for South Staffordshire, won plaudits for his pivotal role in securing the DUP deal which allowed the Tories to form a minority government. Now the Prime Minister is indebted to him again.

At the Tory conference, Williamson became alarmed by the chatter among MPs about a potential putsch. 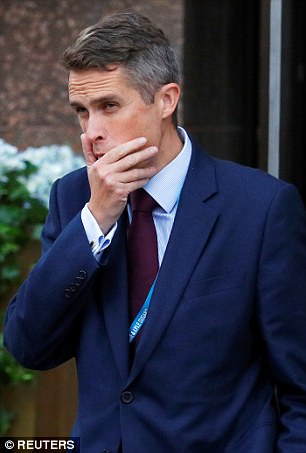 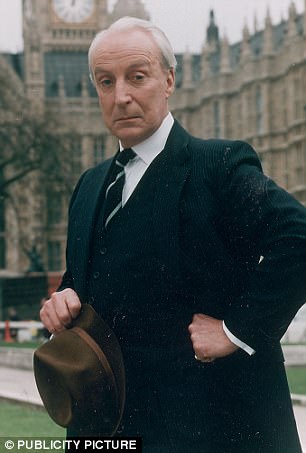 Gavin Williamson (left)  ‘outed’ Shapps as the MP behind the plot to overthrow May – and is now being compared with fictional Chief Whip Francis Urquhart (right), from House Of Cards

He knew the scheming centred on Grant Shapps who fell out with Mrs May in 2014 when he was party chairman and had her senior aides Nick Timothy and Stephen Parkinson – both hoping to become MPs – struck off the parliamentary candidates list.

Williamson, 41, came up with the master stroke of ‘outing’ Shapps as the MP behind the plot.

On Friday, The Times reported authoritatively on its front page that Shapps was the ringleader. Shapps knew it was pointless to deny it, and was visibly shaken as MPs rushed to denounce him. 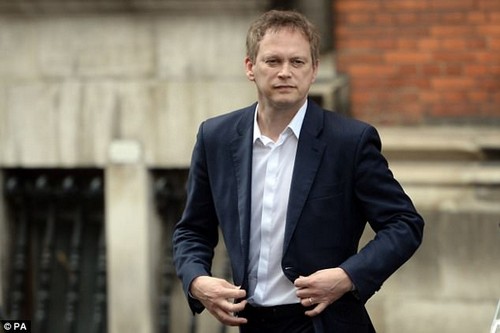 ‘It was a brilliant operation which flushed out Shapps and showed he had no one publicly supporting him,’ said one Cabinet Minister. ‘Gavin is becoming our own Francis Urquhart, steeped in the black arts of political intrigue.’

Urquhart was the fictional Chief Whip in the political thriller House Of Cards and Williamson, a comprehensive-educated Yorkshireman, who was elected in 2010, is himself now being talked up as leader material.

A war of words on whatsapp

Yet Williamson still has a job on his hands. He will be examining messages posted by a group of MPs on the WhatsApp social media site.

Some called for loyalty to the PM while others named and shamed the so-called plotters.

James Cleverly, MP for Braintree and a backer of Boris Johnson, used revoltingly lurid language to urge fellow MPs to stop accusing each other.

Then outspoken backbencher Nadine Dorries effectively accused Duddridge of being anti-May and supporting Shapps’s abortive coup attempt: ‘As your name is supposedly on the Shapps l
ist, perhaps you can deny that is the case.’

There was no response, so she added: ‘You read my message three minutes ago. How long does it take to type not true?’

Other Tory MPs pointed out that Dorries was hardly loyal to David Cameron and George Osborne when she called them: ‘Two arrogant posh boys who don’t know the price of milk.’

But she was unrepentant and accused two more MPs of plotting – former ministers Bob Neill and Owen Paterson, who have both denied the charge.

For good measure, Dorries rounded on Tory MPs Anna Soubry, Heidi Allen and Sarah Wollaston, telling them to ‘shut up’ and withdraw their calls for Boris Johnson to resign.

Meanwhile, Tory MP Alec Shelbrooke mocked Shapps by referring to the police investigation into alleged electoral fraud in the 2015 Tory campaign which Shapps ran. ‘There are fewer signatures on your list than the files sent to the Crown Prosecution Service after the election campaign you ran as chairman.’

Shapps, whose constituency dinner on Friday was addressed by former Cabinet minister Andrew Mitchell – also named as an anti-May plotter – had his name added to the WhatsApp group so he could see for himself the level of abuse he was receiving from his fellow MPs.

Typical of the messages was one saying: ‘Shut the F Up.’

Is Boris certain for the chop?

Meanwhile, with Brexit dominating the agenda, the PM is expected to seek to reassert her authority with a Cabinet reshuffle after the European Council meeting on October 19 and 20.

In an interview yesterday, Mrs May hinted that Boris Johnson could be demoted for overshadowing the party conference with his call for a hard Brexit.

He was also undermined by claims at the weekend that former Labour Transport minister Lord Adonis had been told by him that he only voted for Brexit to spite David Cameron.

In an interview yesterday, Mrs May hinted that Boris Johnson could be demoted for overshadowing the party conference with his call for a hard Brexit

Johnson reportedly told him: ‘I’m not sure I can bear the thought of backing Cameron.’

To which Adonis replied: ‘I would have thought there might be a higher purpose at stake.’

Days after the alleged conversation, Johnson announced he would lead the Brexit campaign to the fury of Cameron who believed he was a Remainer.

Meanwhile, Brexit Secretary David Davis has reportedly also urged Mrs May to sack Johnson because of his interventions on the EU talks – which are the Brexit department’s, not the Foreign Office’s remit.

Davis was so frustrated by the antics of Johnson that he joked to colleagues he would make his keynote conference speech on Syria. ‘How would Boris like that?’ Davis said. 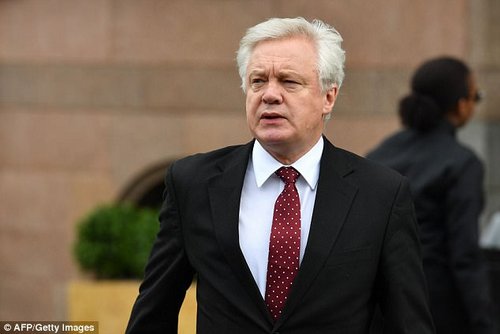 In the end he contented himself with a joke at Johnson’s expense. ‘We train the best diplomats and put them to the test by sending them to work for the Foreign Secretary.’ Davis enjoyed the gag so much he asked Johnson: ‘Did you hear my joke? They loved it.’

While denying he called for Johnson to be sacked, one thing is definitely true. When the so-called comedian Simon Brodkin breached security and clambered up on the stage to interrupt the PM’s speech, Davis seriously considered punching him.

Davis, a former SAS reservist whose nose has been broken five times, said: ‘I didn’t because if he’s a disability campaigner it wouldn’t look too good if I’d decked him.’

As for Johnson, who returned yesterday from an overseas visit, he sent a WhatsApp message to Tory MPs saying: ‘We have JUST HAD AN ELECTION and people are fed up with all this malarkey. Get behind the PM. Ordinary punters I have spoken to thought her speech was good and anyone can have a cold. Circle the wagons, turn the fire on Corbyn and talk about nothing except our great policies and what we can do for the country.’

Not everyone was impressed. One Tory minister said: ‘Boris should start by practising what he preaches.’

Another Cabinet minister known to have poor relations with Boris is Amber Rudd, the Home Secretary. She ordered him to get to his feet to join a standing ovation to give the PM time to recover her composure after the comedian farce.

Rudd is in talks with the Australian election strategist Sir Lynton Crosby to help defend her marginal seat in Hastings and Rye, where she has a majority of just 346.

But there is speculation she is also positioning herself for a tilt at the leadership.

Her brother Roland Rudd, who runs the City PR company Finsbury and was a lynchpin of the Remain campaign, held a champagne party for the first time at the Tory conference. The Home Secretary was the star turn.

Money men back May… for now

Paradoxically, the attempted coup has strengthened May’s hand. ‘Shapps has done her a favour,’ said one. ‘The plotters have been scattered.’

And there’s another indicator that will reassure her. When Iain Duncan Smith became the most recent Tory leader to be ousted in 2003, the trigger was when rich donors went public with their misgivings about his leadership. But the money men are backing Mrs May – for now.

At a suite in the conference hotel last week, some of the richest supporters pledged support for Mrs May. They included financier Michael Spencer, who has given more than £5 million to party funds. Lord Ashcroft, the former treasurer who stopped giving under Cameron but has given £500,000 since he quit, also sent a message of support.

The Midlands Industrial Council, whose members employ more than 40,000 people and have given millions to the party, last night sent a letter to No. 10.

‘At this time we need unity, cohesion and a positive message delivered by a stable Government,’ it says. ‘The electorate made its decision over Brexit and expects it to be implemented. Theresa May… is the best person to be Prime Minister.’