A fed up pensioner has appeared in court after confronting the ring-leader of a gang of youths who tormented him fro two years – and cutting his bike’s brake cables.

Bob Harrison, 74, says he reached the end of his tether after being verbally abused and having eggs, fireworks and stones thrown at his home.

The retired merchant seamen admits he got ‘payback’ when he finally snapped and cut the brake cables and spokes of the 15-year-old ring leader’s bike.

But the incident led to the grandfather being arrested, held in a cell and being convicted of assaulting his abuser who had attacked him with a piece of wood.

CCTV footage shows the attack in which Bob Harrison, right, was struck by a youth with a plank of wood

Speaking about the incident, that happened on June 26, this year, the father-of-two said: ‘I was cleaning up my car and he was giving it verbal, spitting at me and throwing stones.

‘I thought ‘this is payback time’.

‘I got his bike and went to my toolbox and cut all the brake cables and spokes in his wheels. 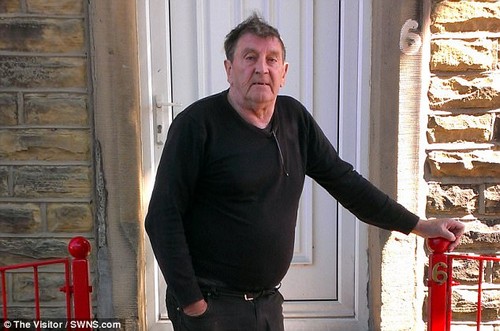 Bob Harrison, 74, says he reached the end of his tether after being verbally abused and having eggs, fireworks and stones thrown at his home

‘Then I said to him ‘How do you like having your stuff smashed up?’

Mr Harrison denies hitting the youth, but says he was advised to plead guilty by his lawyer.

He insisted: ‘I smashed his glasses before I trashed his bike but I never hit him. 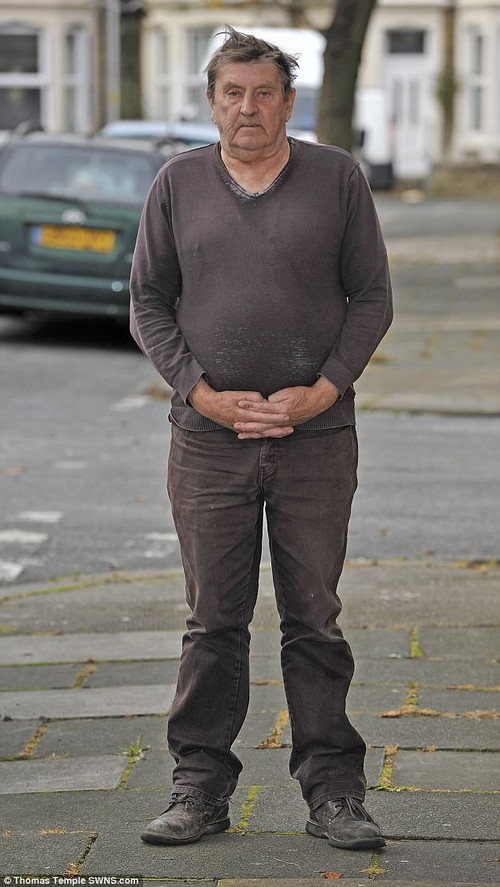 ‘I was just pointing my finger at him. I wanted to plead not guilty but I was advised to plead guilty.

‘I was told that if I pleaded guilty that it will all go away and nothing would happen to me.

‘They were right, in that there was no fine, no community service and I have been told the conviction will be taken off my file in six months, but I now feel I did the wrong thing. 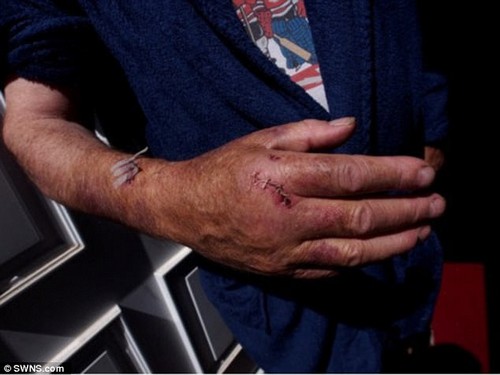 ‘This stinks, all of it. It is a stitch up, a whitewash and a cover up.

‘I feel bitter about what has happened. I feel let down by the police.

‘The police said I was taking the law into my own hands.’

During the same incident Harrison was hit by the teenager with a piece of wood studded with nails and was left bleeding.

He required stitches to wounds on his arm and hand.

He appeared in court alongside the teenager who had attacked him.

Bob Harrison from Morecambe in Lancashire shortly before he was attacked by the gang, who’d tormented him previously

All the residents of Gardner Road in seaside town of Morcambe, Lancashire, are at the mercy of the gang of around a dozen unruly 14 and 15-year-old kids.

Mr Harrison has been phoning the police every time he was targeted but nothing was ever done.

A neighbour who has lived on the street for nine years, said: ‘We have suffered a lot of abuse, stones thrown at the front and back of the house, eggs thrown and the clothes line cut twice.

‘They are terrorising the neighbours and fires are being set all over the place.

‘Although I don’t condone Bob’s actions I can understand them. Something has got to be done or someone will take the law into their own hands.’

He required stitches to wounds on his arm and hand. A neighbour said: ‘Although I don’t condone Bob’s actions I can understand them. Something has got to be done or someone will take the law into their own hands’

Councillor Margaret Pattison said: ‘It’s a shame because he is being hounded by a gang of teenagers.

‘It comes down to there not being a lot for them to do and with the police cuts as well it’s never-ending.’

Holding a pile of letters from residents detailing their experiences, Mr Harrison, who has lived on Gardner Road for 38 years, said: ‘This is residents defending their homes, families, property and belongings against a bunch of criminals.

‘The gang think no-one is going to do anything to them. My actions were justified.’

CCTV footage shows Bob Harrison during the attack, in which he was hit with a plank of wood by a group of youths

Sgt Adie Knowles of Morecambe Police, said: ‘A youth has been convicted of the assault on Mr Harrison and we also arrested someone for breach of bail in connection with the incident.

‘Mr Harrison has regular contact with my team on a weekly basis and he has been referred to wellbeing services. We regularly patrol the area.’

Mr Harrison pleaded guilty to assault and was given a six months conditional discharge and ordered to pay £20 costs.

The youth, who cannot be named for legal reasons, pleaded guilty to causing actual bodily harm to Mr Harrison and was given a six month referral order and ordered to pay £50 compensation and a £20 victim surcharge.