According to CoinMarketCap, the global average bitcoin price crossed $13,000 on Wednesday, a feat that the flagship cryptocurrency accomplished less than one day after breaking through $12,000 for the first time.

Another day, another $1,000 – that’s been the story of the bitcoin price over the course of the past week. Once viewed as historic milestones, bitcoin has begun to knock down the thousand-dollar markers in quick succession, rendering them much less exciting than they were even one month ago.

That constitutes a single-day increase of more than 10 percent, raising bitcoin’s total valuation to a new all-time high of $220 billion, and ordinarily, it would be sufficient to command headlines in both trade and mainstream financial publications alike.

Cryptocurrencies Worth More Than JPMorgan

That’s right, following today’s $25 billion upswing, the cryptocurrency market cap is now valued at $378 billion, enabling it to race more than $11 billion ahead of JPMorgan, which is worth close to $367 billion. 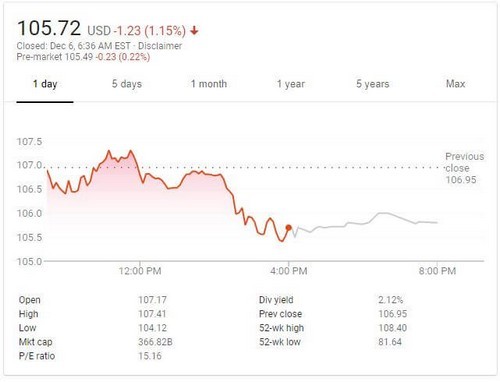 ‘Not Going to Talk About JPMorgan Anymore’

This triumph is particularly sweet for long-term bitcoin investors, who have been the subject of derision from JPMorgan CEO Jamie Dimon for years.

Although many JPMorgan analysts have begun to warm to cryptocurrency – one strategist recently called them an “emerging asset class” – Dimon has been steadfast in his dismissal of bitcoin. He has been silent in recent weeks, perhaps due to bitcoin’s mammoth ascent, but he is on record lambasting bitcoin as a “fraud” that is “worth nothing” and is only attractive to “stupid” investors.

Now, however, the cryptocurrency ecosystem has put JPMorgan in its rear-view mirror, and Warren Buffet’s Berkshire Hathaway has appeared on the horizon. Nevertheless, Dimon does deserve the last word.

“Bitcoin is like 2 billion dollars or 3 billion dollars. We JP Morgan move 6 trillion, a day. So you’ve got to put it in perspective,” said Dimon in 2015, unaware of the historic march it would take just two years later. “I wouldn’t put this high in the category of important things in the world, but I’m not going to talk about bitcoin anymore,” he added earlier this year.

Perhaps Jamie is right – we really should put things in perspective and focus on the important things in the world. Maybe we shouldn’t talk about JPMorgan anymore.