Deep in Brazil ‘s Amazon rainforest is the Sao Domingos rubber plantation, the site of continuing land disputes and a recent rash of killings. 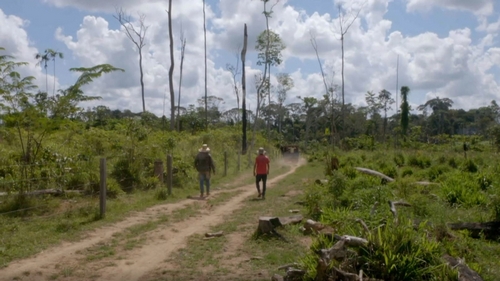 The land has long been fought over by small farmers, loggers and powerful agribusiness companies.

Mauricio Monteiro, an investigative reporter and  cofounder of Reporter Brasil, a publication that focuses on slavery and rural issues, is looking into reported deaths in the area.

He discovers that dubious land claims and plot sales have led to violent disputes amongst a large cast of shady characters, from supposed landowners to poor rural migrants who have come with the hopes of owning a plot of land.

But the more he investigates, the murkier the story becomes.

“I suspect all of the people I’ve spoken to lie to my face,” he says.  “None of them was like a plain villain or a plain victim. So this is a conflict, not only a land conflict but a conflict of narrative.”

Monteiro maintains that the murders are a result of policies implemented by Brazil’s newly-elected government, which he claims has encouraged the plundering of the Amazon to advance a pro-agricultural business agenda.

He says President Jair Bolsonaro ‘s cutting costs to government institutions along the lines of INCRA, the national team in charge of the allocation among land, has caused a wide selection of disputes regarding land ownerships, leading to violence and the prohibited logging of the rainforest.

INCRA’s budget ended up cut from $1bn to $29m, according to a representative.

“INCRA is one of the proclaim bodies that had been surgically crippled by Mr Jair Bolsonaro’s actions so it’s almost unfair to expect that an institution which may be working on such a low budget did intervene in a historical issue as this of rubber plantations in Sao Domingos, very well Monteiro says.

Brazil: The Age of Bolsonaro counters Monteiro as he navigates an actual murky media landscape, risking his safety to insider report on the Amazon and show you the truth.

Meghan Markle’s wedding was a celebration of blackness

The situation in Bolivia will get worse before it gets better