Aaron Schlossberg, the Manhattan lawyer who was filmed this week demanding workers in a restaurant speak English, was treated to a Latin-themed party on Friday night. Outside his apartment.

More than 4,000 people planned to attend the event in midtown Manhattan, which organizers said would “educate Schlossberg on our culture and language by throwing a big fiesta”.

Who this this bigot in Midtown Manhattan? What’s his name?

Here he is harassing & insulting two women for speaking Spanish…TO EACH OTHER in the middle of Manhattan.

Taco trucks and Jarritos were to be on hand, while a hastily assembled crowdfunding campaign managed to secure the services of a mariachi band.

As well as being upset to hear Spanish spoken in New York City, Schlossberg, a white man, threatened to call Immigration and Customs Enforcement (Ice) on the workers. He said he believed they were illegal immigrants.

Progressive Democrats on the rise in Pennsylania

There were big wins for the left in Pennsylvania this week, with two progressive candidates winning primaries to run for the House.

Jess King and Scott Wallace, both backed by the Congressional Progressive Caucus, won in Pennsylvania’s 11th and first districts. Both favor Medicare for all and their fortunes could prove a litmus test in November. 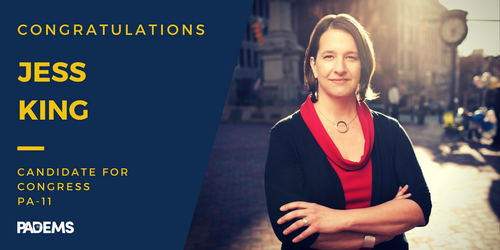 Tuesday’s elections in Pennsylvania also resulted in two women, the Republican Pearl Kim and the Democrat Mary Gay Scanlon, winning primaries in the fifth district – meaning the state is guaranteed to have a female member of its congressional delegation.

Pennsylvania is currently the only state without a woman in the House or Senate, the Huffington Post reported.

Donald Trump’s “remorseless slander of sanctuary cities and those who support them” is an example of how the president is “a wizard capable of conjuring a widespread sense of resentment and distrust by relentlessly repeating the same lie”, writes Will Wilkinson at the Niskanen Center.

Wilkinson says such demonization is “a populist bid to weaken democracy and consolidate power under a strongman to keep America under ‘American’ control”.

Rudd has gone but hostile environment policy set to stay