The staging of an event intended to establish post-Brexit links with a senior far-right politician from Italy’s incoming government, and which was attended by business and political figures including Nigel Farage, has provoked a row within the City of London Corporation.

Organisers of the working lunch for Armando Siri, a senator for Italy’s League party, have been criticised for “rolling out the red carpet for the far right” at the event inside the City’s historic Guildhall.

The person behind some of his party’s most radical plans, Siri was in London on Monday as part of attempts by the League to reassure markets amid fears that its coalition with Italy’s populist Five Star Movement (M5S) could presage a new Greek-style financial crisis within the eurozone.

But a row has erupted inside the City of London Corporation after premises inside its property were used for the event. Senior figures view it as being at odds with the City’s official commitment towards maintaining links with EU markets and feel it risks reputational damage to London’s profile as an ethnically diverse, open capital city.

Moves are also under way to review how council property is used after one of the City’s guilds, or “livery companies”, booked the premises used.

Those who listened to Siri’s presentation included investment fund managers, financial figures and political representatives. Among them was Elizabeth Green, a former marketing and public relations executive and one of the frontrunners in an upcoming election for sheriff of the City of London.

A report on Tuesday by a daily paper owned by Italy’s business confederation said the presence of Farage “underlines the parallel path of radical change made by Great Britain with the choice to leave the EU and Italy with its new government”.

Siri was quoted as saying: “Today I am a guest of a country that has had the great strength of foresight. We too in Italy must have the foresight to change the rules to keep up with the times.”

Mark Wheatley, a Brexit-supporting City of London councillor who facilitated the event, declined to comment. 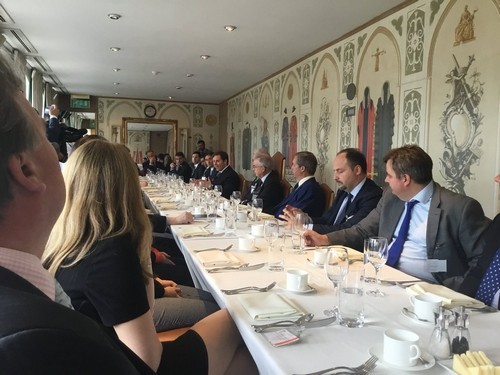 With a great group of business, political City and Livery people in Guildhall for Senator @armandosiri pic.twitter.com/jCQoebHzNe

However, Richard Crossan, a Labour councillor in the City, said: “When elected Labour councillors in the City are constantly reminded of how politically neutral the corporation is, it’s disgraceful that Guildhall’s red carpet is being rolled out for the far right.

“The City prides itself on being welcoming and open to everyone, and the League’s views on Islam are completely incompatible with that.”

The prospect of a populist government in Italy, the eurozone’s third-largest economy, has spooked other EU member states and investors who fear its Eurosceptic, budget-busting programme could destabilise the region and undermine its growth.

During Italy’s election campaign, M5S and the League squeezed their often competing agendas into a government programme that appeared to advocate a spending spree that would add to Italy’s debt load, already Europe’s heaviest after Greece, with little detail on financing.

Anne Fairweather, another councillor, said: “Politicians who seek to divide communities and break us off from our biggest trading partners are no friends of the City, the companies based here or those who live and work here. The City of London Corporation’s facilities should not be used to give divisive politicians a platform.”

The City of London released an official statement describing the event as a private lunch hosted by an outside body.

Many killed in gas unit blast and fire for Pakistan train