Two separate fires broke out in high-rise residential blocks in London and Glasgow on the morning of the first anniversary of the Grenfell Tower fire.

Eight people were treated for smoke inhalation after a fire in a kitchen in a 14th floor flat at Commercial Court, in the Gorbals area of Glasgow. Video from resident Stacey Holmes showed thick black smoke billowing from a few floors above her flat. A neighbour who was trapped in the flat at the time of the video was later rescued.

#Gorbals #FireGlasgow this is my footage from the fire today ? it’s been a tough day @CofGCollege please mark me down as absent ??? pic.twitter.com/w5zziGNKKV

Holmes, a 27-year-old rapper who runs a record label, said she shouted at her 92-year-old neighbour to stay in her flat.

“She was waving a sheet trying to alert people to where she was. When I saw her afterwards she was in shock; all the residents are in shock,” she said. “When I found old today was the anniversary of Grenfell I was shocked even more, it went through my core.”

Alan Fairbairn, the area manager of the Scottish fire and rescue service, said the blaze was contained within an hour and eight of those rescued were taken to Queen Elizabeth University hospital, Glasgow.

Fraser Stewart, the director of New Gorbals housing association, which runs the block, said about 30 homes were evacuated.

“This ended up being a routine incident but the timing was a hellish coincidence. You get fires up high-rise blocks. This was one of the worst but it was contained,” he said.

“There are different building regulations up here. We don’t have flammable cladding in any social housing.”

Hours earlier, about 180 people fled their homes and nearly 60 firefighters and eight fire engines were sent to tackle the first blaze, which broke out on the 12th floor of the block in Elmira Street, Lewisham, south London at 4.14am.

A sprinkler system, a safety feature that was not installed at Grenfell, was able to suppress the fire. London fire brigade declared the blaze under control at 6.02am.

In Lewisham, residents complained about the lack of fire alarms. Nick Cheuk, a 27-year-old structural engineer who lives on the 19th floor with his girlfriend, said most of the residents ignored a “stay-put” policy in the block when they awoke to news of the fire.

He told the Guardian: “I had the windows open and we didn’t hear any alarms go off. A fella from the block opposite was shouting ‘fire’ and that woke me up.

“I looked outside our balcony and could see the smoke. From there we just evacuated and I knocked on all of the neighbours doors on our floor and then ran down the stairs.

“Given that a year today was Grenfell, the first thing I thought was to just get out. That was in the back of everyone’s mind. There is a stay-put policy. Not everyone left, there was a fella on our floor who literally slept through the whole thing. The fire was contained in the flat, so in this case the stay-put policy worked.”

Video by Cheuk showed the orange glow of flames and black smoke spewing from a flat on the 13th floor. 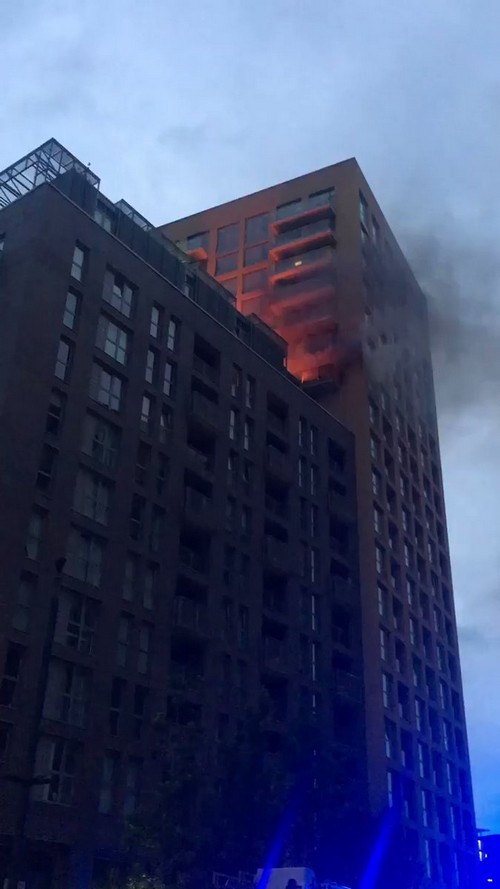 Cheuk said the block was built about four years ago by Barratt Homes. He and his girlfriend were allowed back into their rented one-bedroom flat at 7.30am.

“The police said the fire was completely contained and there was about 25% fire damage in the flat itself,” he said.

Christoph Mayr, a 32-year-old opera singer manager who lives on the 19th floor with his girlfriend, said: “We’d been talking about Grenfell last night. We were thinking about how irresponsibly that building had been maintained and how horrible for the people.

“And then you wake up in the middle of the night and think this must have been what it was like, waking up because people were screaming. When we opened the door you could immediately feel that the temperature was higher.”

Mayr added: “When we moved in we thought: do we really want to live on a high floor in case a fire happens? But we thought it would be OK because it’s a modern building, open in 2015, with sprinklers and alarms.

“As we were going down and there were no alarms, we were thinking what else isn’t working? I’m angry with the people who built the block and managing it.”

Mayr called for a review of fire safety in the block: “I definitely want a proper investigation of what was going on and why the alarms didn’t work. They need to revisit what tests and procedures they’ve got in place. I want to be satisfied that something is going to change.”

Caleb Parker, a 40-year-old entrepreneur who lives on the 10th floor, also said questions should be asked about the lack of fire alarms. “There is consistent concern from everybody that I talked to about the lack of alarms. I’ve spoken to several neighbours and nobody heard a fire alarm,” he said.

“One guy on the 16th floor said he was woken by the smell of smoke. Every building should review fire alarms in light of last year and now this. There is needs to be questioned asked.”

He added: “Around 4.20am I was awoken by someone banging on my door, and I heard other people yelling ‘fire, get out’. So I turned to my wife and said ‘get up, let’s go’.”

Evacuated at four this morning. Fire is out and everybody is safe, but very concerned there were no alarms going off. So grateful to the people in the buildings opposite screaming their tits off to alert us. #lewisham #fire pic.twitter.com/c51nPX6rEp

There were no reports of injuries and the cause of the fire was being investigated.

Not the best way to wake up this morning!
But thankful for the firefighters who kept this from spreading this morning, and neighbors who banged on each others door since the fire alarm did not sound.

Kudos to the police too for their professionalism. #LewishamFire pic.twitter.com/Hb2JiePHNJ

Crews from Lee Green, Deptford, New Cross, Forest Hill and Lewisham were among those sent to tackle the blaze, the London fire brigade said.

Pictures from the scene posted by the London ambulance service showed emergency vehicles outside the block.

We are currently on scene in #Lewisham working with @LFBLEWISHAM and @MPSLewisham with a fire call.

The brigade’s 999 control officers took 16 calls about the fire. 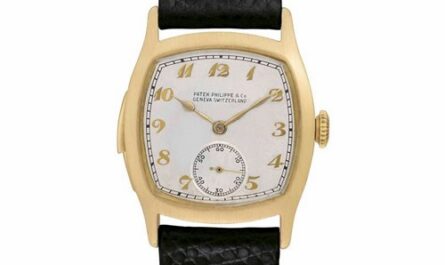 Is The UK Positioning Itself For Global Fintech Leadership?