That’s it from me this evening. For a full report on the government’s amendment to the EU withdrawal bill, read this:

Have a peaceful evening.

Reaction to the amendment is pouring in from all sides.

This is why some Tory MPs think a “meaningful vote” clause is unnecessary: because if MPs rejected the Brexit deal it would be impossible for the government to stay in office… https://t.co/iXmMQhAG5b

Remain-supporting Labour MP Chuka Umunna, who is calling for a referendum on the Brexit deal, has said the amendment undermines trust in the government.

He told the Press Association:

If MPs in the prime minister’s own party can’t rely on her to keep her word, then how can our friends and allies in the EU trust any commitments she makes in the negotiations?

The simple reality is this: no matter how much the Brextremist minority wishes it were different, there is no majority in parliament for a destructive ‘no deal’ Brexit. And with-two thirds of voters now saying that Theresa May is handling Brexit badly, this kind of shambles shows exactly why we need a people’s vote on the final Brexit deal.

Department for Exiting the European Union has put out a statement on the government’s amendment to the EU withdrawal bill.

“Our new amendment respects the tests set out by the prime minister and the Brexit secretary”, a DExEU spokesperson said.

“We have listened to those across the house who called for the ability to express their views, in the unlikely event that our preferred scenario did not come to pass.

“That is why we have included three situations which would trigger a vote in both houses: a) should parliament reject the government’s deal with the EU, b) that no agreement can be reached, or, c) there is no deal agreed by the 21 January 2019. This ensures that in all circumstances parliament can hold government to account, while also allowing government to deliver on the will of the British people as expressed in the referendum.

“But this remains hypothetical and the government is confident we will agree a good deal with the EU which parliament will support.”

The Conservative MP Anna Soubry has called the actions of the government “unforgivable” and said ministers had gone back on an agreement at the last minute, without consulting Dominic Grieve who had been liaising on the amendment. Soubry said MPs would now consider backing Grieve’s previous amendment in full, which did not go to a vote on Monday night in the Commons after a compromise was struck with the prime minister. It has now been tabled in the Lords, where it will be debated on Monday.

“We want parliament to have a vote, and a say, deal or no deal. I believed, as many of my colleagues did, that the prime minister had agreed to that so on Tuesday, we didn’t push it to a vote and we met the prime minister and agreed that Dominic Grieve would work with people from the government and come up with an amendment that delivered exactly that, so in the event of no deal, there would a debate and vote, a meaningful vote, in parliament.

“That was what was agreed. Dominic, the solicitor general and others reached an agreement. It suddenly all changed. Which is the way of things sometimes. The appalling thing is that no one actually spoke to Dominic Grieve before they tabled that amendment at 5pm. I think that is unforgivable, you don’t behave like this, I’m very, very disappointed.”

Soubry said a “perfectly sensible compromise” had been reached this afternoon but had then been abandoned unexpectedly. “Unfortunately it looks like the prime minister has sided with them as opposed those people who accept we are leaving and want to get the best deal for our constituents and our country,” she said.

She said Conservative MPs who had trusted May’s promises in their private meeting on Tuesday night would be disappointed, and said they would have another chance if the Lords returned their amendment to the Commons next week. “We have tabled Dominic Grieve’s original amendment and which has been the subject of these discussions. We tabled it in the Lords in effect to take account of what we thought might happen but hoped wouldn’t happen, that the government would go back on an agreement that had been made,” she said. “

Dominic’s amendment is there in the Lords along with this amendment which has not been agreed by Dominic and people like myself. And both will be debated in the House of Lords on Monday night and then come back to the Commons. And it will be crunch time in my opinion. And people will have to decide if they are going to put their country and their constituents first. Or whether they are going to put loyalty to the Conservative party first. As an MP I took an oath, that I would put my constituents and country first.

“On Tuesday night, many people decided to back the prime minister, they took her at her word, they may well now feel very badly let down. They may choose not to blindly go along with this ridiculous amendment, but back the original amendment that Dominic tabled on Tuesday night. We are leaving the EU but we are not going to let these ideological hard Brexiters take us off a cliff, destroy our economy, destroy peace in Northern Ireland. We are going to do the right thing and put our country and our constituents first.”

The Tory rebellion is back on.

Read the report from Heather Stewart and Anne Perkins here:

Keir Starmer, Labour’s shadow Brexit secretary, has reacted to the government’s amendment on giving parliament a meaningful vote on the final Brexit deal.

.@Keir_Starmer: “The Government’s amendment is simply not good enough. Theresa May has gone back on her word and offered an amendment that takes the meaning out of the meaningful vote. Parliament cannot – and should not – accept it.”

It’s complicated stuff, but in short, it seems like the Dominic Grieve deal is off.

The government’s amendment describes what must happen if the UK prime minister announces that no deal has been reached with the European Union on the withdrawal agreement or the future relationship.

Under a no deal scenario, a government minister must make a statement to parliament within 14 days and give MPs the chance to vote. However, the vote would be on “a motion in neutral terms”, meaning that parliament has merely considered the statement.

Instead, if no deal is reached, the new version offers a vote on the government’s plans, “in neutral terms, to the effect that the House of Commons has considered the matter”. Grieve et al say that would make it unamendable – take it or leave it – and so unacceptable.

The long-awaited amendment has finally been tabled.

Tory remainer Anna Soubry has said the government wording may not meet the rebels’ demands, tweeting that the amendment had not been agreed by Dominic Grieve. 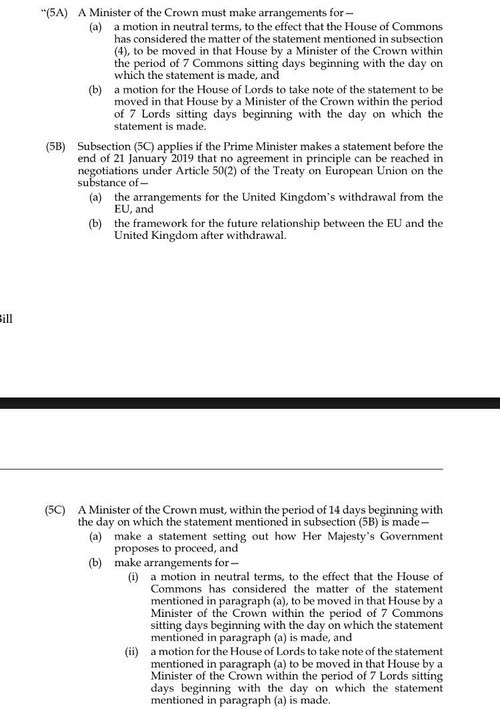 Here it is – the government’s amendment has landed… pic.twitter.com/HnniGU1hSi

The compromise over the “meaningful vote” amendment appear to have fallen apart, with Tory remainers reportedly rejecting the government position.

Remainers rejecting govt’s compromise-Grieve says govt amendment is ‘unacceptable’ – govt has indeed made it unamendable which means they could theoretically turn it into a confidence vote – Grieve says it was ‘inexplicably changed’ at last minute, and was not agreed by him

Govt agreed to final version it seems without getting Grieve to sign it off – as it happens he is on Question Time tonight – Remainers warning this is a ‘big, bad mistake’ –