Philip Hammond, the chancellor, has also been using his speech in Germany to insist that the UK will have to give up some of the advantages of EU membership when it leaves, Paul Brand reports. Hammond’s warning against “cherry picking” could also been seen as a rebuke to Johnson, who is famously a proponent of wanting to have one’s cake and eat it (which is the same as what the EU calls cherry picking).

NEW: Having been accused by Boris of running the Treasury like the ‘heart of remain’, Chancellor delivers a reality check in Germany. “Anything that looks like cherry picking will not be acceptable to the EU… we will have to give up some of the advantages” of being a member.

Theresa May is going to address Conservative MPs on Monday evening, the Times’ Sam Coates’ reports. That’s the night before they debate the Lords amendments to the EU withdrawal bill, and so presumably she will be requesting some loyalty.

Theresa May will address the Conservative Parliamentary Party at 6pm on Monday in Portcullis House, the chief whip announces pic.twitter.com/EUJEugUda8

Downing Street has said that Theresa May still has full confidence in Boris Johnson as foreign secretary. It is the ritual question that gets asked at lobby whenever a minister does something embarrassing, or worse, and normally journalists get the ritual answer – as they did today.

(On the very rare occasions when No 10 refuses to say the PM has full confidence in the offending minister, that’s normally a clear sign they need to start clearing the office.)

Beyond answering the confidence question, the prime minister’s spokeswoman refused to comment at today’s briefing on Johnson’s comments at the private dinner.

This is from ITV’s Paul Brand.

NEW: Chancellor on Boris’s claim that Trump would be better negotiator with EU… “In my experience a collaborative approach is more productive than a confrontational approach and my advice to colleagues is to engage with European partners.”

Hammond was referring to how Boris Johnson suggested that a Trump-style approach to the Brexit talks would work better than what Theresa May is doing now. Johnson said:

I am increasingly admiring of Donald Trump. I have become more and more convinced that there is method in his madness … Imagine Trump doing Brexit. He’d go in bloody hard … There’d be all sorts of breakdowns, all sorts of chaos. Everyone would think he’d gone mad. But actually you might get somewhere.

My colleague Dan Sabbagh was at the Best for Britain launch this morning. (See 10.18am.) He says it is understood that around 40 MPs have indicated they are willing to sign an amendment backing a second referendum on Brexit. Here is his report.

Sarah Wollaston, the Conservative MP and chair of the Commons health committee, believes that Boris Johnson was quite happy for his remarks to Conservatives at a private dinner to be made public.

Boris ‘leak’ a bit like him using the Tory WhatsApp group as a kind of deniable press briefing. Dressing up publicly broadcast insults under the cover of a ‘private’ discussions won’t wash.

Wonder too what our US allies think of the confidentiality of their own discussions with Boris about the situation in North Korea if that’s going to be passed on for after dinner entertainment?

Emily Thornberry, the shadow foreign secretary, points out that she was calling for Boris Johnson to be sacked even before his latest indiscretion.

As I was saying to Boris Johnson in November… pic.twitter.com/qFL1KWe6ru

Nicola Sturgeon said she struggled to find diplomatic language to express her views about Boris Johnson. (See 10.40am.) The Labour MP Jess Phillips doesn’t have quite the same scruples. She posted this on Twitter.

For god sake sack this man! His own position matters more than the safety and security of our nation. He is the epitome of dripping entitlement. He doesn’t understand anything about ordinary lives and he cares even less. F**king sack him! https://t.co/qMmpacOVOJ

Keith Brown, the Scottish government’s cabinet secretary for the economy, has been elected as the SNP’s deputy leader. This is from the Herald’s Tom Gordon.

Keith Brown is new depute leader of SNP, beating Julie Hepburn by 55.2 to 44.8 per cent after redistribution of Chris McEleny’s votes

Nicola Sturgeon, the Scottish first minister, has been giving interviews this morning ahead of the opening of the SNP’s conference. And she has called for Boris Johnson, the foreign secretary, to be sacked. She told the BBC:

Any prime minister that had any semblance of authority would have got rid of Boris Johnson a long time ago, not just because of comments like this. It’s not the first time he’s made comments that suggest that he’s – I’m finding it difficult to think of a diplomatic term to use about him, actually.

I just don’t think Boris Johnson is somebody who should be in one of the high offices of state. I don’t think the way he conducts himself, I don’t think the opportunistic way he puts his own interests constantly ahead of what is obviously in the best interests of the country, is behaviour befitting of somebody holding that office. 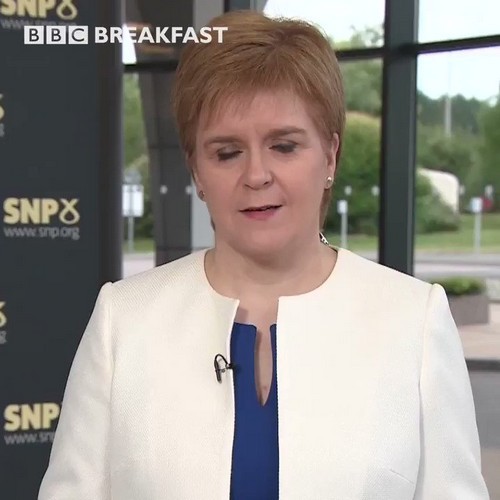 “I don’t think Boris Johnson is somebody who should be in one of the high offices of state.” pic.twitter.com/NxGnka9Tjc

The Press Association’s Andy Woodcock is at the Best for Britain launch.

Eloise Todd of @BestForBritain sets out “roadmap” to second #Brexit referendum. “The will of the people is changing… The 48% is now over 50% and rising” pic.twitter.com/LjmcKBB3dz

Good morning. Sorry for the late start. I was held up for various reasons.

The news this morning has been dominated by the leak of Boris Johnson’s private views on Brexit, Donald Trump and much else. To summarise, he thinks that there could be a “meltdown” and that the UK would be doing better if Trump were in charge of the negotiations. (A cynic might say, given how things are going at the moment, Trump probably couldn’t make things much worse.) Michael Howard, the former Conservative leader this morning, weighed in this morning, suggesting he agreed with Johnson’s complaints about the Treasury.

All of this is good timing for Best for Britain, the anti-Brexit group, which this morning is formally launching its campaign for a second referendum. It has set out a roadmap showing how this might be achieved. Here is the summary from its news release.

The key points of the roadmap are:

The bill would be introduced by government and passed by parliament

In early 2019, the WAIB continues through parliament whilst a national conversation is launched

A people’s vote is held before March 2019

Lord Malloch-Brown, the former Foreign Office minister (in Gordon Brown’s government) who chairs Best for Britain, said this plan would show how Britain could solve the national uncertainty of Brexit via a democratic process. And Eloise Todd, Best for Britain’s chief executive, said:

For too long we’ve been asked to swallow the lie that the votes of 17m people – with their individual histories, experiences, and ideas – gave May a clear mandate to deliver whatever Brexit she can fashion, no matter how different that is from its original conception or how damaging it might prove to be. But I say to everybody out there: don’t let them force feed you such nonsense. However you voted, you deserve to know there is a deal on offer that the government is intent on burying.

Here is the agenda for the day.

10am: Best for Britain launches its formal campaign for a second referendum.

10.30am: The SNP conference opens in Aberdeen with the announcement of the winner of the election for deputy leader (or depute leader, as they call it in Scots.) Other highlights include speeches from Ian Blackford, the leader at Westminster, at 12.15pm, and John Swinney, the deputy first minster, at 3pm.

4.45pm (UK time): The G7 summit in Canada formally opens. Theresa May is representing the UK.

As usual, I will be covering breaking political news as it happens, as well as bringing you the best reaction, comment and analysis from the web. I plan to post a summary at the end of the day.

You can read all today’s Guardian politics stories here.

I try to monitor the comments BTL but normally I find it impossible to read them all. If you have a direct question, do include “Andrew” in it somewhere and I’m more likely to find it. I do try to answer direct questions, although sometimes I miss them or don’t have time.

If you want to attract my attention quickly, it is probably better to use Twitter.