Distant relatives of Frida Kahlo have won a temporary injunction that stops sales of a Barbie doll depicting the late Mexican artist.

Kahlo’s great-niece Mara de Anda Romeo argued in a Mexican court that Mattel does not have the rights to use Kahlo’s image as part of its Inspiring Women series.

According to a copy of a ruling posted on Thursday, the toymaker and department stores in Mexico must stop commercializing the doll until the issue is resolved.

Mattel has said it worked with the Panama-based Frida Kahlo Corporation which it claims has rights to the artist’s image.

In a Twitter post, the family’s official account, @FridaKahlo, wrote that a Mexico City judge had ordered the Frida Kahlo Corporation to stop using the “brand, image and work of the illustrious painter Frida Kahlo” without permission from the owner of the rights. 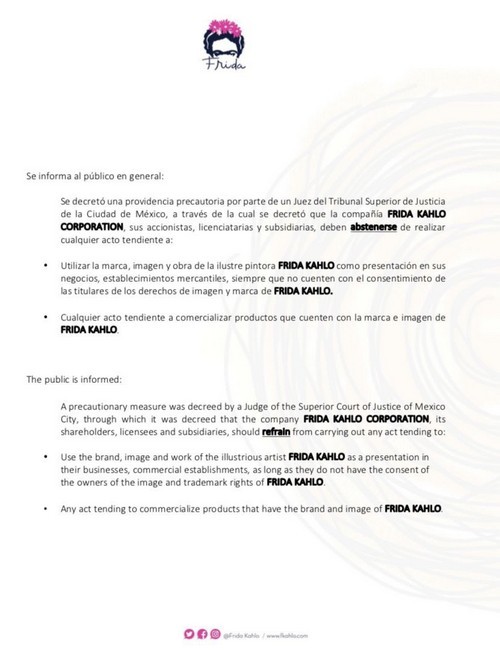 Se informa al público en general: / To whom it may concern: pic.twitter.com/DljBNX2H9q

Critics say the doll does not reflect Kahlo’s heavy, nearly conjoined eyebrows, and its costume does not accurately portray her elaborate Tehuana-style dresses.

Barbie is an American icon that has often been criticised as promoting an unrealistic body image and consumerist lifestyle. Kahlo was a lifelong communist who died in 1954.

Last month, Mattel said in a statement that it worked with the Panama-based Frida Kahlo Corp, “which owns all the rights”.

“The Frida Kahlo Corporation actively participated in the process of designing the doll, Mattel has its permission and a legal contract that grants it the rights to make a doll of the great Frida Kahlo,” the company’s statement said.

The corporation said it got the rights through Kahlo’s niece, Isolda Pinedo Kahlo, more than a decade ago.

The corporation said that it “celebrates the ideological contributions of Frida Kahlo which have transcended the borders of art and which will influence new generations as a world icon through the Frida Kahlo Barbie, which conserves the essence of Barbie and the legacy of Frida Kahlo”.

Barbie marked International Women’s day in March by choosing 17 modern-day and historic role models to honour with a doll in their likeness.

Included in the brand’s Inspiring Women series alongside Kahlo are the pioneering aviator Amelia Earhart and Katherine Johnson, the Nasa mathematician who broke race and gender barriers. Johnson, who is now aged 99, was featured in the recent film Hidden Figures.