Lincolnshire residents kept calm and carried on after a 3.9-magnitude earthquake with its epicentre in Grimsby struck on Saturday night.

People used the hashtag #HullEarthquake on Twitter to share their experiences. “Picture fell off daughter’s wall around 11:15 and frame broke. Glad to know it wasn’t my DIY skills to blame,” one wrote. “Make sure to mark yourself safe on Facebook,” quipped another.

“2018, things are bad right now, had to break out emergency rations … Water running out ( … of taps while I fill kettle for a cuppa),” wrote Twitter user Rich Peall, with a picture of some field rations.

The British Geological Survey (BSG) said the seismic event took place at 11.14pm at a depth of 18 kilometres (11 miles), with its epicentre in the north-east Lincolnshire seaside town. No serious damage is thought to have been caused.

The European-Mediterranean Seismological Centre (EMSC), an independent earthquake monitoring organisation, said it had received reports from more than 600 witnesses as far as 60 miles (100km) from the epicentre.

The organisation also said it had seen a spike in the number of visits to its websites in the minutes following the tremor from areas as far away as Liverpool and Middlesbrough.

The quake came nearly a decade after a 5.2-magnitude earthquake in Market Rasen, Lincolnshire, was felt across England and Wales.

The largest earthquake this year took place in Cwmllynfell in south Wales on 17 February and registered a magnitude of 4.6. 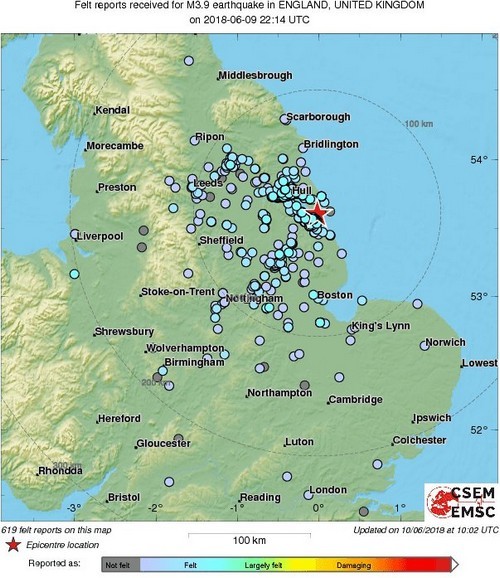 Here is the latest version of the map of the effects of the #Hullearthquake as reported by 600+ eyewitnesses pic.twitter.com/RyqEQGBTsk

Despite the excited reactions online, the BSG said earthquakes of similar magnitude occur about every two years in the UK, with 8,000 larger earthquakes annually around the world.

Glen Ford, a BGS seismologist, said: “It is of the size we would expect people to start reporting it to us, but it is actually much smaller than the one 10 years ago at Market Rasen, 30km from this earthquake, that was 90 times bigger.”

Witness reports to the BGS included “the whole house shook for a couple of seconds”, “heard a rumble with a simultaneous trembling”, “the bed started to shake”, “the radiator jolted” and “thought it was a lorry crashing outside”.

One witness from Walkington, near Hull, told the EMSC: “I felt the Market Rasen earthquake eight years ago. Today at 11.15pm I heard a low, weird rumbling seeming to come from the street outside, a quiet cul de sac, at about the pitch of a lorry, like a dustcart or gritter. It lasted about five seconds.

“It was followed immediately by a cracking sound, like roof timbers settling in our eaves cupboard to the side of the upstairs bedroom where I was sitting. Quite scary and within a couple of seconds my first reaction was ‘earthquake!’”

Duterte fires VP from anti-drug post weeks after giving it

Without Chile’s volunteer medics ‘protesters would bleed out’